Golden Cross and Death Cross Explained
Table of Contents
Introduction
What is a golden cross?
What is a death cross?
Golden cross vs. death cross - what’s the difference?
How to trade the golden cross and the death cross
Closing thoughts
TradingTechnical AnalysisEconomics 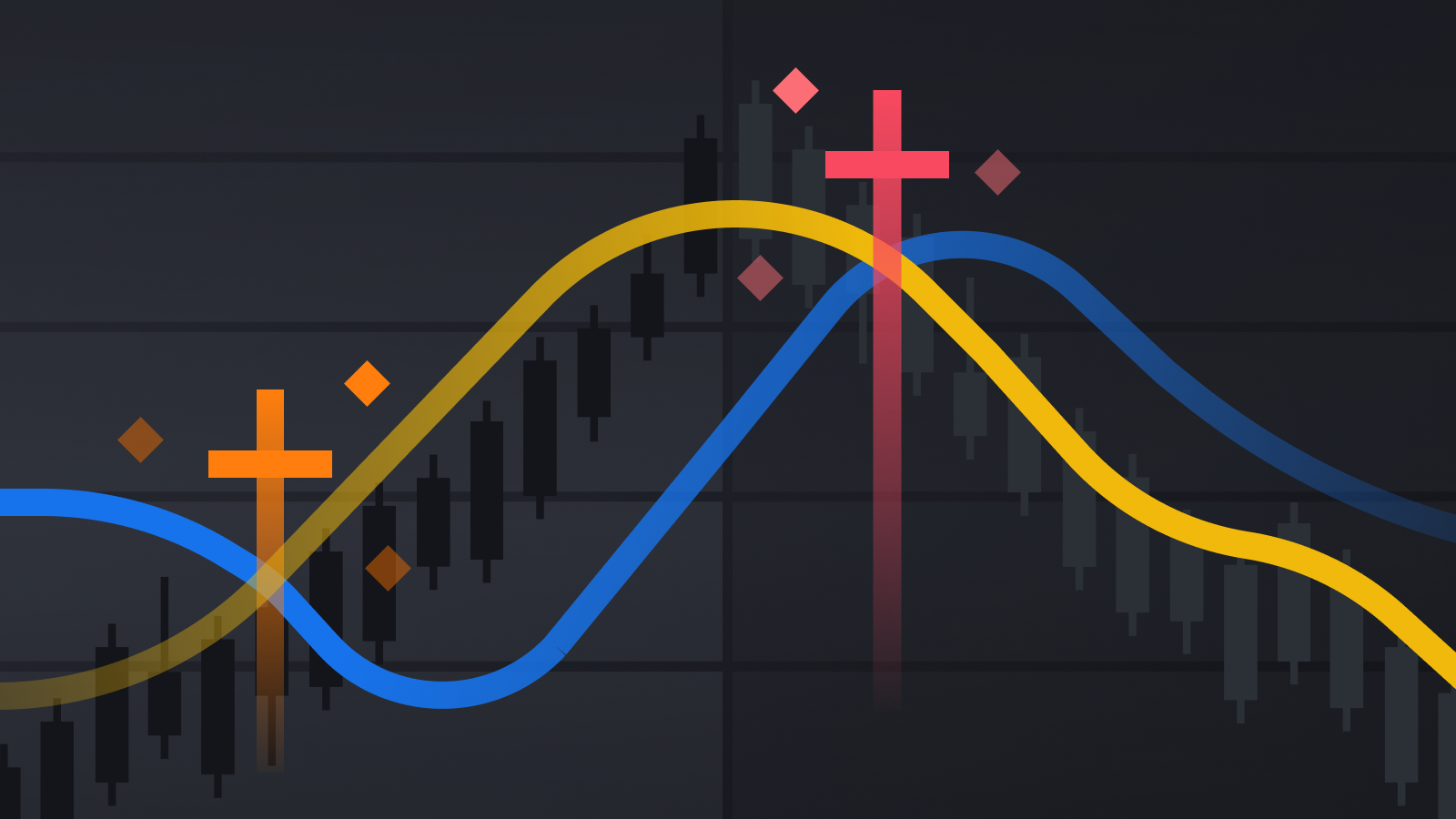 Chart patterns are abundant when it comes to technical analysis. We have already talked about them in A Beginner’s Guide to Classical Chart Patterns, and 12 Popular Candlestick Patterns in Technical Analysis. However, there are many other patterns out there that can be useful for day traders, swing traders, and long-term investors. The golden cross and the death cross are two good examples.
Before we get into what a golden cross and a death cross are, we need to understand what a moving average (MA) is. In short, it’s a line plotted over a price chart that measures the asset’s average price for a given time frame. For example, a 200-day moving average will measure the average price of the asset in the last 200 days. If you’d like to read more about moving averages, we have an article about them: Moving Averages Explained.
So, what is a golden cross and a death cross, and how can traders use them in their trading strategy?

What is a golden cross?

A golden cross indicating a new uptrend in Bitcoin.

So far, we’ve considered a golden cross with what’s called a simple moving average (SMA). However, there is another popular way to calculate a moving average called the exponential moving average (EMA). This uses a different formula that puts a higher emphasis on more recent price action.

EMAs can also be used to look for bullish and bearish crossovers, including the golden cross. As EMAs react more quickly to recent price movements, the crossover signals they produce may be less reliable and present more false signals. Even so, EMA crossovers are popular among traders as a tool for identifying trend reversals.

What is a death cross?

A death cross confirming a downtrend in Bitcoin.

The death cross has provided a bearish signal before major economic downturns in history, such as in 1929 or 2008. However, it may also provide false signals, for example, in 2016.

False death cross crossover signal on the SPX in 2016.

As you can see on the example, the market printed a death cross, only to resume the uptrend and print a golden cross shortly after.

We’ve discussed both of them, so the difference between them isn’t difficult to understand. They are essentially the polar opposites of each other. The golden cross may be considered a bullish signal, while the death cross a bearish signal.

Both of them can be confirmed by high trading volume. Some technical analysts may also check other technical indicators when looking at the crossover context. Common examples include the Moving Average Convergence Divergence (MACD) and the Relative Strength Index (RSI).
What’s also important to remember is that moving averages are lagging indicators and have no predictive power. This means that both crossovers will typically provide a strong confirmation of a trend reversal that has already happened – not a reversal that’s still underway.

How to trade the golden cross and the death cross

The basic idea behind these patterns is quite straightforward. If you know how traders use the MACD, you’ll easily understand how to trade these crossover signals.
When we’re talking about the conventional golden cross and death cross, we’re usually looking at the daily chart. So, a simple strategy could be to buy at a golden cross and sell at a death cross. In fact, this would have been a relatively successful strategy for Bitcoin in the last few years – though there were many false signals along the way. As such, blindly following one signal is typically not the best strategy. So you might want to consider other factors when it comes to market analysis techniques.
If you’d like to read about an easy strategy to build a longer-term position, check out Dollar-Cost Averaging (DCA) Explained.

The crossover strategy mentioned above is based on daily MAs crossing. But what about other time periods? Golden crosses and death crosses happen just the same, and traders can take advantage of them.

Something many traders will also look for when trading golden crosses and death crosses is the trading volume. As with other chart patterns, the volume can be a strong tool for confirmation. As such, when a volume spike accompanies a crossover signal, many traders will be more confident that the signal is valid.
Once a golden cross happens, the long-term moving average may be considered as a potential area of support. Conversely, once a death cross happens, it may be considered as a potential resistance area.
Crossover signals may also be crosschecked with signals from other technical indicators to look for confluence. Confluence traders combine multiple signals and indicators into one trading strategy in an attempt to make the trade signals more reliable.

We’ve discussed some of the most popular crossover signals – the golden cross and the death cross.

A golden cross involves a short-term moving average crossing above a long-term moving average. A death cross involves a short-term MA crossing below a long-term MA. They both can be used as reliable tools for confirming long-term trend reversals, whether it comes to the stock market, forex, or cryptocurrency.
Do you have more questions about trading crossover signals like the golden cross and death cross? Check out our Q&A platform, Ask Academy, where the community will answer your trading questions.
What Is Backtesting?
Dec 8, 2020
6m
A Guide to Mastering Fibonacci Retracement
Mar 20, 2020
6m
What Are Perpetual Futures Contracts?
Jul 15, 2019
7m
Explore all of our content