Let’s create a sequence of numbers that starts with zero and one, and keep adding the sum of the two preceding numbers to the current one. If we continue this indefinitely, we get a number string that’s called the Fibonacci sequence. 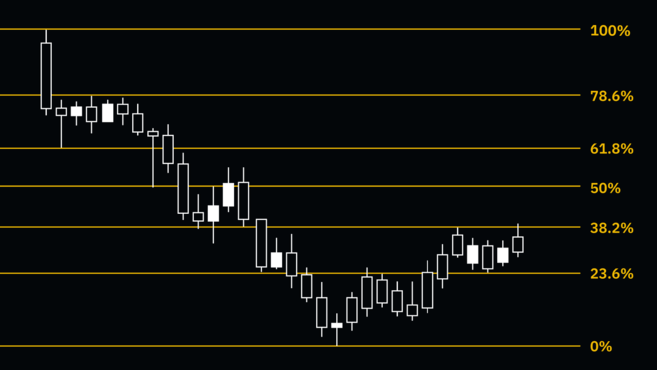 Fibonacci levels are also often combined with the Elliott Wave Theory to find correlations between wave structures and potential areas of interest. This can be a powerful strategy to predict the extent of retracements in different waves of a particular market structure.

As with other techniques, the Fibonacci retracement tool is at its most powerful when combined with other technical analysis indicators. What may not be a buy or sell signal on its own could turn into one if confirmed by other indicators. As such, if the price hits a specific Fibonacci level, it may reverse, or it may not. So it’s essential to manage risk, while also taking the market environment and other factors into consideration.

However, as with all technical indicators, the relationship between price action, chart patterns, and indicators isn’t based on any scientific principle or physical law. As such, the Fibonacci retracement tool’s usefulness may be related to the number of market participants paying attention to it. So, even if Fibonacci retracement levels don’t necessarily correlate with anything tangible, they may work as a tool to try and predict areas of interest.

What Is Compound Finance in DeFi?
2mo ago
6m
A Guide to Cryptocurrency Fundamental Analysis
2mo ago
14m
What Is Quantitative Easing (QE)?
1yr ago
5m
Explore all of of our content