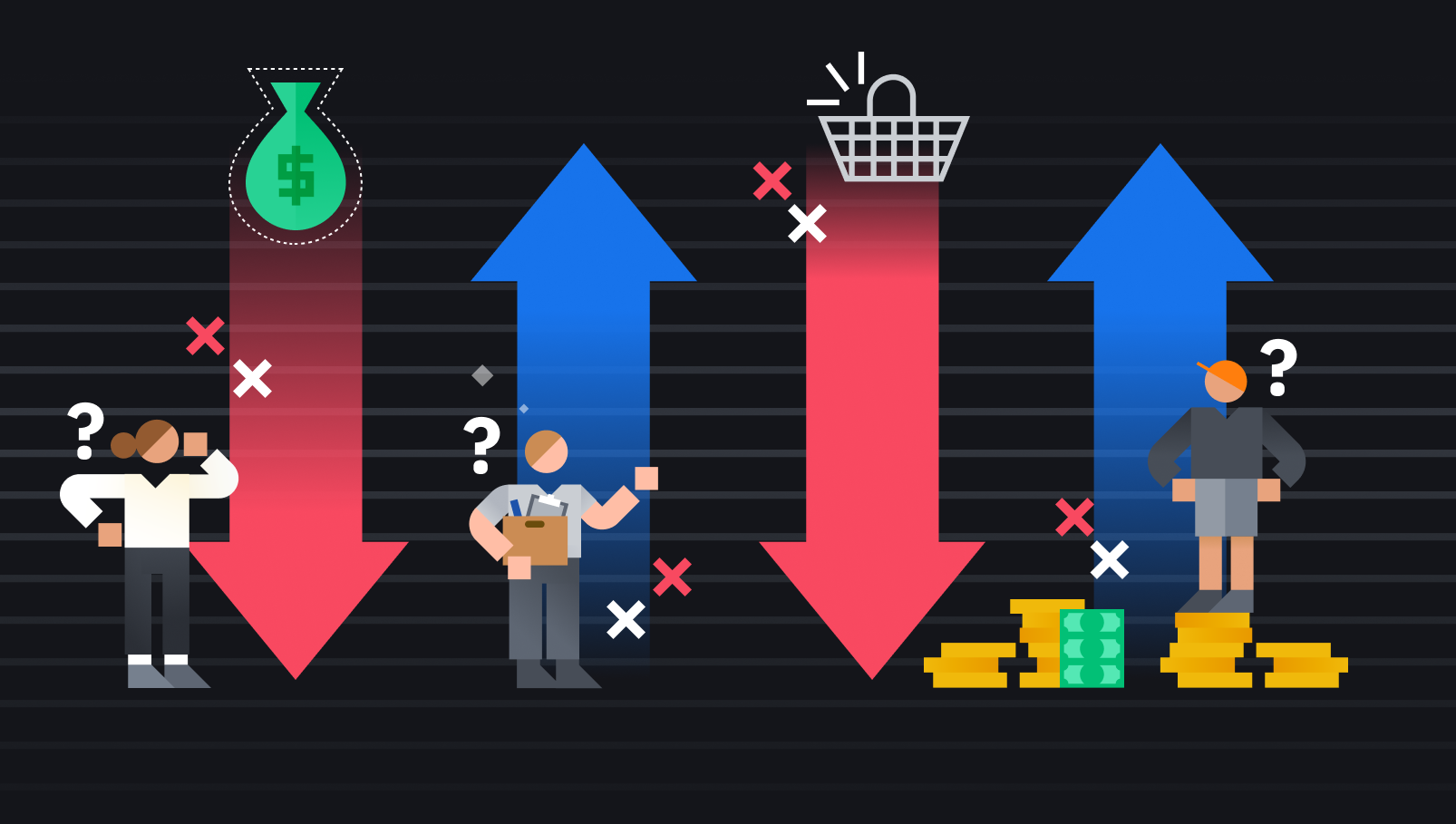 首页
文章
What Is Stagflation?

Stagflation happens when an economy experiences high unemployment rates combined with stagnation or negative growth (recession) and rising prices (inflation). There are strategies to combat recession and inflation individually, but since these are conflicting effects, the combination of both makes stagflation challenging to control.

On one side, economic stagnation or negative growth can be addressed by increasing the money supply, making it cheaper for companies to borrow money (lower interest rates). More money available leads to expansion and higher employment rates, which can effectively prevent or combat a recession.

In contrast, economists and policymakers often try to control rising inflation by reducing the money supply to slow the economy down. This can be done by raising interest rates, making it more expensive to borrow money. Businesses and consumers borrow and spend less, and the reduced demand causes prices to stop rising.

However, when an economy experiences stagflation, we have the worst of both sides: a recession combined with high inflation. Let’s dive deeper to understand what stagflation is, its common causes, and potential solutions.

Stagflation is a macroeconomic concept first mentioned in 1965 by Iain Macleod, a British politician and Chancellor of the Exchequer. The name is a combination of stagnation and inflation, describing an economy experiencing minimal or negative economic growth and high unemployment combined with rising consumer prices (inflation).

The typical economic controls used to combat each condition individually can worsen the other, making stagflation tricky for a government or central bank to deal with. Usually, high levels of employment and growth positively correlate with inflation, but that’s not the case with stagflation.

Economic growth is often measured by a nation’s gross domestic product (GDP), which is directly related to employment rates. When GDP is not performing well, and inflation is rising, severe stagflation can lead to a broader financial crisis.

Stagflation, as we have seen, is the combination of inflation and economic stagnation or negative growth. While inflation can be defined in different ways, it often refers to an increase in the prices of goods and services. We could also describe inflation as a decrease in the purchasing power of a currency.

Why does stagflation occur?

In short, stagflation occurs when the purchasing power of money decreases at the same time the economy slows down and the supply of goods and services decreases. The exact causes of stagflation vary depending on the historical context and the different economic views. There are a variety of theories and opinions that explain stagflation differently, including the monetarist, Keynesian, and new classical models. Let’s see some examples.

Central banks like the US Federal Reserve manage the supply of money to affect the economy. These controls are known as monetary policy. Governments also directly affect the economy with spending and tax policies known as fiscal policy. However, a clashing combination of fiscal and monetary policy can lead to runaway inflation and slow economic growth. Any combination of policies that reduce consumer expenditure while increasing the money supply could eventually lead to stagflation.

For example, a government may raise taxes leaving its population with less disposable income. The central bank simultaneously may be engaged in quantitative easing ("printing money") or reducing interest rates. The government's policy will negatively affect growth while the central bank increases the supply of money, which often leads to inflation.

The introduction of fiat currency

Previously, most major economies pegged their currencies to an amount of gold. This mechanism was known as the gold standard but was widely abandoned after World War II. The removal of the gold standard and its replacement with fiat currency removed any limits on the supply of the money. While this might facilitate the work of central banks in controlling the economy, it also risks damaging inflation levels, causing higher prices.

A sharp increase in the production costs of goods and services can also cause stagflation. This relationship is especially true for energy and is known as a supply shock. Consumers also suffer from a rise in energy prices, typically stemming from oil prices.

If goods cost more to produce and prices rise, and consumers have less disposable income due to heating, transport, and other energy-related costs, stagflation is more likely to occur.

How do you combat stagflation?

Combating stagflation is achieved through fiscal and monetary policy. However, the exact policies enacted depend on the economic school of thought.

Monetarists (economists who believe controlling the supply of money is the most key) will argue that inflation is the most crucial factor to be controlled.

In this scenario, a monetarist would first reduce the money supply, which reduces overall spending. This leads to less demand and a fall in the prices of goods and services. The downside, however, is that this policy doesn't encourage growth. Growth would have to be tackled later through loose monetary policy combined with fiscal policy.

Another school of thought is to increase supply in the economy by reducing costs and improving efficiency. Price controls on energy (if possible), efficiency investments, and production subsidies will help reduce costs and increase the economy's aggregate supply. This lowers prices for consumers, stimulates economic output, and reduces unemployment.

Some economists believe the best cure for stagflation is to leave it to the free market. Supply and demand will ultimately settle rising prices as consumers cannot afford goods. This fact will lead to a reduction in demand and lower inflation.

The free market will also efficiently allocate labor and reduce unemployment. However, this plan could take years or decades to work successfully, leaving the population in unfavorable living conditions. As Keynes once said, "in the long run, we're all dead."

How could stagflation affect the crypto market?

The exact effects of stagflation on crypto are difficult to define fully. However, we can make some basic assumptions if we assume other market conditions stay the same.

A barely growing or shrinking economy leads to stagnating income levels or even a reduction. In this case, consumers have less money to invest. This could lead to a reduction in purchasing crypto and an increase in sales as retail investors need access to money for daily expenses. The slow or negative economic growth also encourages big investors to reduce their exposure to higher-risk assets, including stocks and cryptocurrencies.

Typically a government will try to control inflation first and then deal with the growth and unemployment problem. Inflation can be curbed by reducing the money supply, with one method being a raise in interest rates.

This reduces liquidity as people keep their money in banks, and borrowing becomes more expensive. With a rise in rates, high-risk and high-return investments are less appealing. Crypto, therefore, may see a reduction in demand and prices during periods of rising interest rates and lower money supply.

Once a government has inflation under control, it will likely want to stimulate growth. This is typically done through quantitative easing and a reduction in the interest rate. In such a scenario, the effects on crypto markets will likely be positive due to the increase in the money supply.

A rise in inflation

Many investors argue that Bitcoin can be a good hedge against rising inflation rates. With higher, rising inflation, keeping your wealth in fiat without earning interest reduces its real value. To avoid this, many have turned to Bitcoin to preserve their long-term purchasing power and even make profits. This is due to investors seeing BTC as a good store of value due to its limited issuance and supply.

Historically, this hedging strategy might have worked well for investors that accumulated Bitcoin and other cryptocurrencies over the years. In particular, during or after periods of inflation and economic growth. However, using crypto as a hedge against inflation might not work well in shorter time frames, especially during periods of stagflation. It’s also worth noting that there are other factors in play, such as the increased correlation between crypto and stock markets.

Stagflation in the 1973 oil crisis

In 1973, the Organization of Arab Petroleum Exporting Countries (OPEC) declared an oil embargo on a select group of countries. This decision was a reaction to support for Israel in the Yom Kippur war. With a dramatic decrease in the oil supply, oil prices rose, leading to supply chain shortages and higher consumer prices. This led to a huge increase in the rate of inflation.

In countries like the USA and UK, central banks cut interest rates to encourage growth in their economies. Lower interest rates make it cheaper to take out loans and provide an incentive to spend rather than save. However, the typical mechanism to reduce inflation is raising interest rates and encouraging consumers to save.

With oil and energy costs making up a large part of consumer expenditure, and the cut in interest rates not stimulating enough growth, many western economies experienced high inflation and a stagnant economy.

Stagflation presents a unique situation for economists and policymakers as inflation and negative growth don’t usually occur together. The tools to combat stagnation often cause inflation, while strategies to control inflation can lead to slow or negative economic growth. So, in times of stagflation, it's worth considering the macroeconomic context and its multiple factors, such as money supply, interest rates, supply and demand, and employment rate.