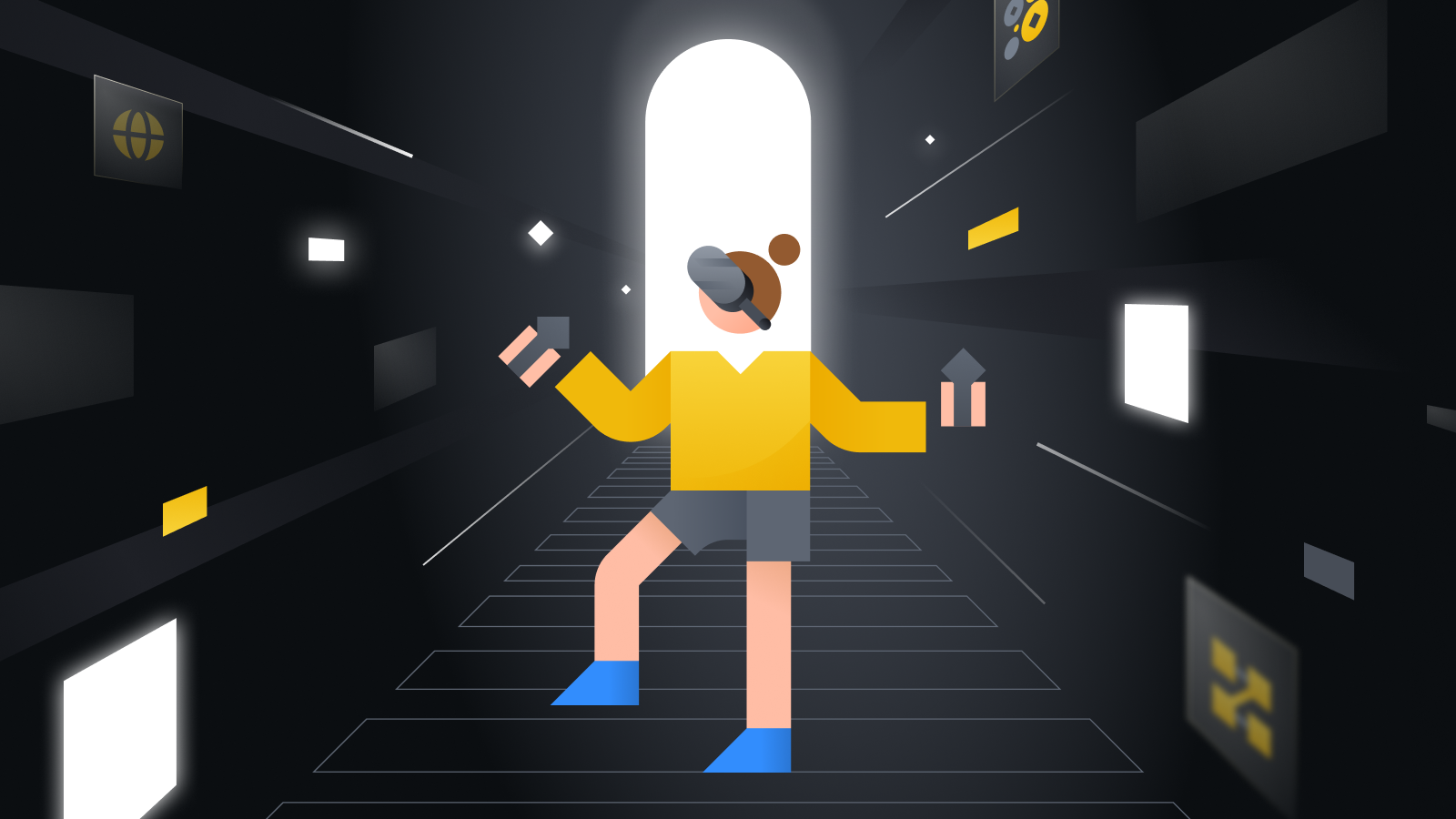 The term “metaverse” describes the collective virtual spaces where our physical and digital worlds intersect. The concept has been bending the minds of science fiction enthusiasts for ages. However, it has only recently begun to show indications of becoming a reality, with technological advancements and the proliferation of the Internet. The role of blockchain technology in the metaverse has also become increasingly important, as it provides the infrastructure for creating a decentralized and secure platform on which it can be built.

The term "metaverse" was first coined in the early ’90s in the sci-fi world. In the years since, the concept of a metaverse has evolved due to recent technological innovations. It has also gained increasing attention as a potential digital platform for both social and economic activity.

The rise of blockchain technology and cryptocurrency has also played an important role in the development of the metaverse. Many projects have already explored it, using these technologies to create decentralized and immersive virtual worlds. This article will provide a brief history of the metaverse and explore crypto's role in its evolution.

The metaverse is still not entirely defined. However, the general idea is that it is a virtual space connecting our digital and real-world lives. Some call it the next evolution of the Internet that will make online experiences interactive and immersive.

Defining the metaverse is difficult as it encompasses much more than just a single product, service, or project. Instead, it combines different technologies, such as the Internet, augmented reality (AR), virtual reality (VR), artificial intelligence (AI), 3D reconstruction, and the Internet of Things (IoT).

In science fiction where the term “metaverse” originated, it’s portrayed as a highly immersive and interactive virtual world. Today, blockchain technology and cryptocurrencies are taking actionable steps to make this concept a reality.

The Web3 movement has shown that the metaverse is not just confined to the sci-fi genre but is something that might already exist. Web3 has been forming an ecosystem that incentivizes developers to build metaverse-like decentralized applications (DApps), such as play-to-earn (P2E) games. Games like Axie Infinity, The Sandbox, and Decentraland already contain aspects of the metaverse, connecting elements of players' lives to online worlds.

A Brief History of the Metaverse

Over the years, different ideas and technological advancements have driven us closer to the concept of the metaverse we currently understand. From the concept of binocular vision, through the creation of Bitcoin and Ethereum, all the way to the rebranding of Facebook – the metaverse has a deep foundation.

As mentioned earlier, the metaverse will probably use VR technology to immerse people in digital environments. The earliest instance of VR occurred in 1838, when scientist Sir Charles Wheatstone outlined the concept of "binocular vision," constructing a single 3D image.

This initial research led to the development of stereoscopes, a technology that uses the illusion of depth to create an image — the same technology VR headsets utilize today.

American sci-fi author Stanley Weinbaum published the book Pygmalion's Spectacles, which introduced readers to the possibility of virtual reality. The book's main character immerses himself in a fictional world using a pair of goggles that mimic all human senses, making the world seem real.

It's often said that French poet and playwright Antonin Artaud was the first to use the term "virtual reality" or "la réalité virtuelle." He wrote about it in his collection of essays, The Theater and its Double, where he spoke about how theaters can stage characters, objects, and images to create alternative worlds.

American filmmaker Morton Heilig built a machine that made people feel like they were riding a motorcycle in another location. The device, named Sensorama, immersed its users in a different reality by combining effects such as a moving seat, scents, and 3D screens. Even though the machine never progressed past the prototype stage, it demonstrated the possibility of blurring the lines between illusion and reality.

British computer scientist Tim Berners-Lee wrote the first proposal for the World Wide Web while working at CERN. The web was initially created for universities and institutions to share information worldwide.

The metaverse was first mentioned in the sci-fi novel Snow Crash by Neal Stephenson. The American sci-fi writer illustrated a dystopian future world that allowed people to use digital avatars to escape to a better alternate reality.

Computer scientists Moni Naor and Cynthia Dwork invented the proof-of-work (PoW) concept to prevent service misuses, such as denial-of-service attacks and network spam. This controlled unwanted network behavior by requiring proof of work, such as computer processing time, from a service requester.

Linden Lab launched multimedia platform Second Life. While not fully immersive (no goggles or gloves are involved), users can connect to shared virtual spaces to explore, interact, and create using their computers. Second Life is not seen as a game but more of an online gathering place where anyone can create a new digital presence.

Roblox Corporation released the game platform Roblox, which allows users to play various multi-player games. In addition, users can develop their own games and for others to play. While users can play Roblox for free, it has an in-game store where players can spend their virtual money, called Robux.

Google released Street View to add to its existing Maps product. Street View enables people to turn a map into a representation of the real world — anyone can view a street on their mobile device or computer as it appears in real life.

Satoshi Nakamoto announced the first major decentralized blockchain and cryptocurrency, Bitcoin, in 2008. He then mined the first BTC in 2009.

Entrepreneur Palmer Luckey launched Oculus, a headset whose hardware can connect users to a 3D virtual world where they can work, socialize and enjoy entertainment. Two years later, in 2014, Facebook bought Oculus, intending to scale the technology for the masses.

Kevin McCoy and Anil Dash minted the first ever non-fungible token (NFT), Quantum, which contained an image of a pixelated octagon. Minted on the Namecoin blockchain, it wasn't called an NFT but instead, conceptualized as "monetized graphics".

Vitalik Buterin proposed the idea of Ethereum in a 2013 blog post titled Ethereum: The Ultimate Smart Contract and Decentralized Application Platform. The decentralized computing platform Ethereum then launched in 2015. Ethereum allows developers to experiment with their own code to create DApps by using smart contracts.

2016 was the year of both decentralized autonomous organizations (DAOs) and Pokémon GO coming into existence. The first DAO, simply called The DAO, was launched on Ethereum with a vision that every member could comprise its governing body.

Pokémon GO, which uses AR to connect to a 3D map of the real world, has become one of the most successful mobile games of all time. In 2016 alone, it became one of the world’s most profitable and widely used mobile apps, having been downloaded over 500 million times globally by the end of the year.

Facebook rebranded to Meta, which then established the metaverse as something more tangible than a sci-fi concept. Since then, the company has invested billions of dollars in developing and acquiring metaverse-related resources such as metaverse content, software, and AR and VR headsets.

Siemens and NVIDIA announced a joint partnership to create the Industrial Metaverse. The collaboration draws on Siemens’ reputation in industrial automation and software, infrastructure, building technology, and transportation and NVIDIA’s status as a pioneer in accelerated graphics and AI. According to the Siemens CEO, the collaboration will enable a real-time, immersive metaverse that connects hardware and software.

Blockchain and Crypto’s Role in the Metaverse

Blockchain technology and cryptocurrency can play a foundational role in metaverse development. Firstly, blockchains can provide the infrastructure for secure and transparent transactions in the metaverse, such as cryptocurrencies for fast and secure transfers of value. Secondly, the nature of Ethereum enables the creation of NFTs, which can be used to represent unique virtual items in the metaverse.

Thirdly, DApps could make metaverse services and functionality more decentralized so it won’t be controlled by any single organization. They can also enable users to own and control their data and assets, providing a level of security and autonomy that traditional centralized applications can't allow.

Other technologies involved in metaverse development include VR and AR, interactive tools that allow users to experience the virtual world by interacting with virtual objects and navigating the metaverse. Additionally, AI and natural language processing can help to create more realistic and interactive avatars within the metaverse.

As the metaverse continues to evolve, more use cases for blockchain and crypto are likely to be found. As it is, they have the potential to transform how people interact and how they conduct business in the metaverse. By enabling decentralized, trustless, and transparent interactions, blockchain and its applications can help to create a more open, secure, and efficient metaverse.

The Future of the Metaverse

Metaverse development has come a long way in recent years. However, the infrastructure and services required to support its growth have yet to be fully realized. For instance, the technology that drives virtual environments must be further developed to be as realistic and engaging as possible.

In addition, the metaverse requires high-speed, low-latency networks that can support large numbers of users in real time, as well as tools and platforms to create and share virtual experiences. There are also issues related to privacy, security, and governance developers must address to ensure the metaverse is a safe and inclusive space for all users.

Additionally, the growth of the metaverse will likely be influenced by further innovation in technologies like extended reality, AI, machine learning, 3D engines, cloud, edge computing, and 5G connectivity. As they improve, the metaverse will become increasingly immersive and realistic, allowing users to experience a digital world that feels just like the real one.

It's still too early to say if the metaverse will become the killer app for blockchain technology. However, as blockchain can securely and transparently record transactions and enable the creation of digital assets and new applications, it could be a fitting choice for the development and operation of the metaverse.

The concept of the metaverse has its roots in sci-fi, beginning as a fictional universe explored in books, TV, and film. However, as technology has advanced, the idea of an immersive shared digital world has become increasingly feasible.

The rise of cryptocurrencies and blockchain technology has also played a significant role in the development of the metaverse by providing a decentralized and secure platform for virtual transactions and interactions. While the metaverse as we know it today is still in its infancy, it holds enormous potential for transforming how we live, work, and play in the digital world.