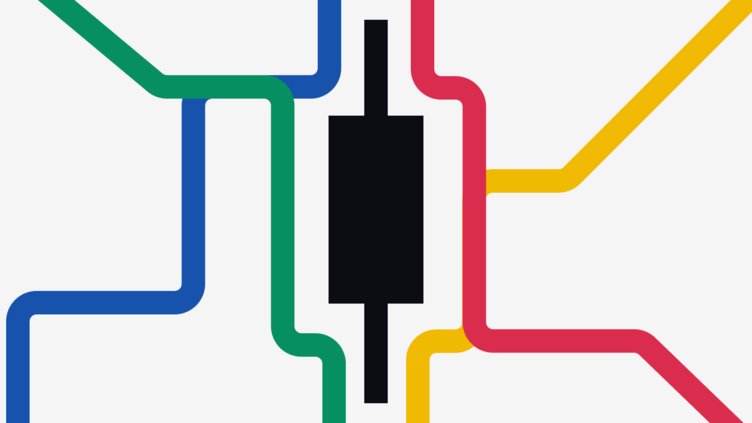 A Beginner's Guide to Candlestick Charts

As a newcomer to trading or investing, reading charts can be a daunting task. Some rely on their gut feeling and make their investments based on their intuition. While this strategy might temporarily work in a bullish market environment, it most likely won’t in the long run.

Essentially, trading and investing are games of probabilities and risk management. So, being able to read candlestick charts is vital to almost any investment style. This article will explain what candlestick charts are and how to read them.

What is a candlestick chart?

A candlestick chart is a type of financial chart that graphically represents the price moves of an asset for a given timeframe. As the name suggests, it’s made up of candlesticks, each representing the same amount of time. The candlesticks can represent virtually any period, from seconds to years.

Candlestick charts date back to about the 17th century. Their creation as a charting tool is often credited to a Japanese rice trader called Homma. His ideas were likely what provided the foundation for what is now used as the modern candlestick chart. Homma’s findings were refined by many, most notably by Charles Dow, one of the fathers of modern technical analysis.

While candlestick charts could be used to analyze any other types of data, they are mostly employed to facilitate the analysis of financial markets. Used correctly, they’re tools that can help traders gauge the probability of outcomes in the price movement. They can be useful as they enable traders and investors to form their own ideas based on their analysis of the market.

How do candlestick charts work?

The following price points are needed to create each candlestick:

Collectively, this data set is often referred to as the OHLC values. The relationship between the open, high, low, and close determines how the candlestick looks.

How to read candlestick charts

Many traders consider candlestick charts easier to read than the more conventional bar and line charts, even though they provide similar information. Candlestick charts can be read at a glance, offering a simple representation of price action.

In practice, a candlestick shows the battle between bulls and bears for a certain period. Generally, the longer the body is, the more intense the buying or selling pressure was during the measured timeframe. If the wicks on the candle are short, it means that the high (or the low) of the measured timeframe was near the closing price.

The color and settings may vary with different charting tools, but generally, if the body is green, it means that the asset closed higher than it opened. Red means that the price moved down during the measured timeframe, so the close was lower than the open.

Some chartists prefer to use black-and-white representations. So instead of using green and red, the charts represent up movements with hollow candles and down moves with black candles.

What candlestick charts don’t tell you

While candlesticks are useful in giving you a general idea of price action, they may not provide all you need for a comprehensive analysis. For instance, candlesticks don’t show in detail what happened in the interval between the open and close, only the distance between the two points (along with the highest and lowest prices).

For example, while the wicks of a candlestick do tell us the high and low of the period, they can't tell us which one happened first. Still, in most charting tools, the timeframe can be changed, allowing traders to zoom into lower timeframes for more details.

Candlestick charts can also contain a lot of market noise, especially when charting lower timeframes. The candles can change very quickly, which can make them challenging to interpret.

So far, we have discussed what is sometimes referred to as the Japanese candlestick chart. But, there are other ways to calculate candlesticks. The Heikin-Ashi Technique is one of them.

Heikin-Ashi stands for “average bar” in Japanese. Such candlestick charts rely on a modified formula that uses average price data. The main goal is to smooth out price action and filter out market noise. As such, Heikin-Ashi candles can make it easier to spot market trends, price patterns, and possible reversals.

While Heikin-Ashi candlesticks can be a powerful tool, like any other technical analysis technique, they do have their limitations. Since these candles use averaged price data, patterns may take longer to develop. Also, they don’t show price gaps and may obscure other price data.

Candlestick charts are one of the most fundamental tools for any trader or investor. They not only provide a visual representation of the price action for a given asset, but also offer the flexibility to analyze data in different timeframes.

An extensive study of candlestick charts and patterns, combined with an analytical mindset and enough practice may eventually provide traders with an edge over the market. Still, most traders and investors agree that it’s also important to consider other methods, such as fundamental analysis.

Liquidity Explained
1yr ago
6m
What Is Scalping Trading in Cryptocurrency?
2mo ago
7m
What Is a Bear Market?
2mo ago
6m
Explore all of of our content