Black Monday and Stock Market Crashes Explained
Table of Contents
What is Black Monday?
What causes market crashes?
What is a circuit breaker?
How to prepare for market crashes
Other notable Black Mondays
Closing thoughts
Trading
Technical Analysis
Economics

What is Black Monday?

Black Monday is the name used to describe a sudden and severe stock market crash that occurred on October 19th, 1987. The Dow Jones Industrial Average (DJIA), an index that measures the US stock market performance, fell more than 22%. The crash was preceded by two other large drops a week before.

Performance of the Dow Jones Industrial Average around the time of Black Monday.

Black Monday is remembered as the beginning of a global stock market decline. To date, it’s one of the most infamous days in the history of stock markets.

The total trading volume on exchanges was so high that computers of the time were incapable of handling the sudden high load. Orders were left unfilled for hours, and large transfers of funds were delayed.

A major crash like this one is naturally followed on the futures and options markets. The crash had a significant impact on global markets as well. Most of the major indexes around the world had dropped between 20-30% by the end of the same month.

The term “Black Monday” typically refers to the crash in 1987. But, it’s also used to refer to other severe market crashes.

Generally, the cause of stock market crashes can’t be attributed to a single factor. Interestingly, no major news event preceded the 1987 Black Monday. However, several different factors came together that, in combination, created an atmosphere of panic and uncertainty. So, what were these factors?

The first was the introduction of computerized trading systems. Today, most trading activity is facilitated by computers, but this wasn’t always the case. Before the 1980s, stock markets were typically noisy and crowded venues where traders exchanged assets directly on the trading floor of the exchange. 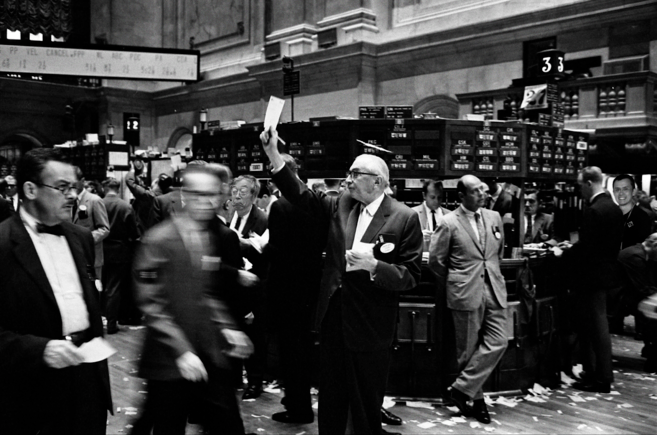 The trading floor of the New York Stock Exchange (NYSE) in 1963, before the introduction of computerized trading systems. Source: Library of Congress. Image modified from original.

Throughout the 1980s, however, trading activity started to rely more heavily on computer software. The shift to computerized trading enabled considerably faster trading activity with systems capable of placing thousands of orders in seconds. Naturally, these advancements also affected the velocity of large price moves. In contrast, today’s trading bots can move trillions of dollars of value within seconds of an unexpected news event.

Other factors, such as a trade deficit in the United States, international tensions, and other geopolitical circumstances have also been named as causes. On top of that, the growing reach of the media certainly amplified the effects and severity of the event.

It’s worth noting that while all these factors may have contributed to the crash, decisions were nevertheless made by people. Market psychology plays a major part in sell-offs, and they are often simply a result of mass panic.

What is a circuit breaker?

Following the events of Black Monday, several mechanisms were put in place by the US Securities and Exchange Commission (SEC) to prevent similar events from occurring again. Or, if not to prevent completely, to at least try to mitigate their impact.

One of these methods is called a circuit breaker. It’s a regulatory measure that halts trading when the price reaches certain percentage levels relative to the daily open. While we’re primarily talking about the United States here, circuit breakers have been implemented in many other markets as well.

Circuit breakers apply to major indexes such as the Dow or the S&P 500, as well as individual securities. Here’s how they work.

Advantages and disadvantages of circuit breakers

While circuit breakers may be effective at preventing flash crashes, they have been a topic of controversy.

Some critics of circuit breakers argue that they have a negative effect on the markets and actually increase the severity of crashes. How so? Since these predetermined percentage levels are based on the market open, they’re public knowledge. As such, they may affect order placement and artificially decrease liquidity in the order book at certain price levels.

Decreased liquidity can lead to more volatility, as there may not be enough orders to absorb an unexpected spike in supply. Critics argue that without the influence of circuit breakers on areas of liquidity, the markets are more likely to reach a natural equilibrium.

When it comes to global market indexes like the S&P 500, circuit breakers are only triggered on moves to the downside. On the other hand, they can be activated on individual securities on moves to the upside as well.

How to prepare for market crashes

Due to the nature of markets and crowd psychology, crashes are almost inevitable. But what can you do to prepare for a market crash?

Another thing to consider is setting a stop-loss. Protecting your downside for shorter-term trades is an absolute must to be a successful trader. However, the practice is surprisingly less common when it comes to longer-term investors. Even if your stop-loss leaves room for larger price moves, it could save you from hefty losses when a devastating market crash happens.

As for global market crashes, they all have been temporary so far. While times of economic recession may span multiple years, the markets tend to recover afterward. If you zoom out far enough, the global economy has been in consistent growth for centuries, and these corrections are only temporary setbacks.

Performance of the Dow Jones Industrial Average between 1915 and 2020.

While this observation may be correct for global markets tied to economic growth, it doesn’t apply to the cryptocurrency markets. The blockchain industry is still young and cryptocurrencies are a risky asset class. As such, some cryptoassets may never recover after a severe market crash.

Stock markets crash, preceding the Great Depression in the 1930s. Considering its long-term economic effects, the crash during the autumn of 1929 has been the most destructive stock market crash to date.

Following the bursting of the US housing bubble, stock markets started to crash. This eventually led to the Great Recession during the late 2000s and early 2010s. If you’d like to read more, check The 2008 Financial Crisis Explained.

Worst day for the US stock market since the Great Recession, fueled by the coronavirus pandemic and an oil price war. At the time, it had been the largest single-day drop since 2008. But, as you’ll see in the next paragraph, this record only held for a single week.

Fears over the potential economic effects of the coronavirus pandemic continued to increase. As a result, the US market experienced an even larger single-day drop than during the crash a week earlier. This day may be seen as the peak of the initial shock of the coronavirus’ effect on the financial markets.

Following the events of Black Monday, new regulations were implemented to try to mitigate the effects of stock market flash crashes. One of the most impactful and controversial of these regulations is the circuit breaker, which halts trading when predefined percentage loss levels are hit.

What can you do to prepare for inevitable market crashes? Think of the possible scenarios to create a proper investment plan or trading strategy. Risk management, portfolio diversification and market psychology are a few topics that may help you avoid big losses during market crashes.