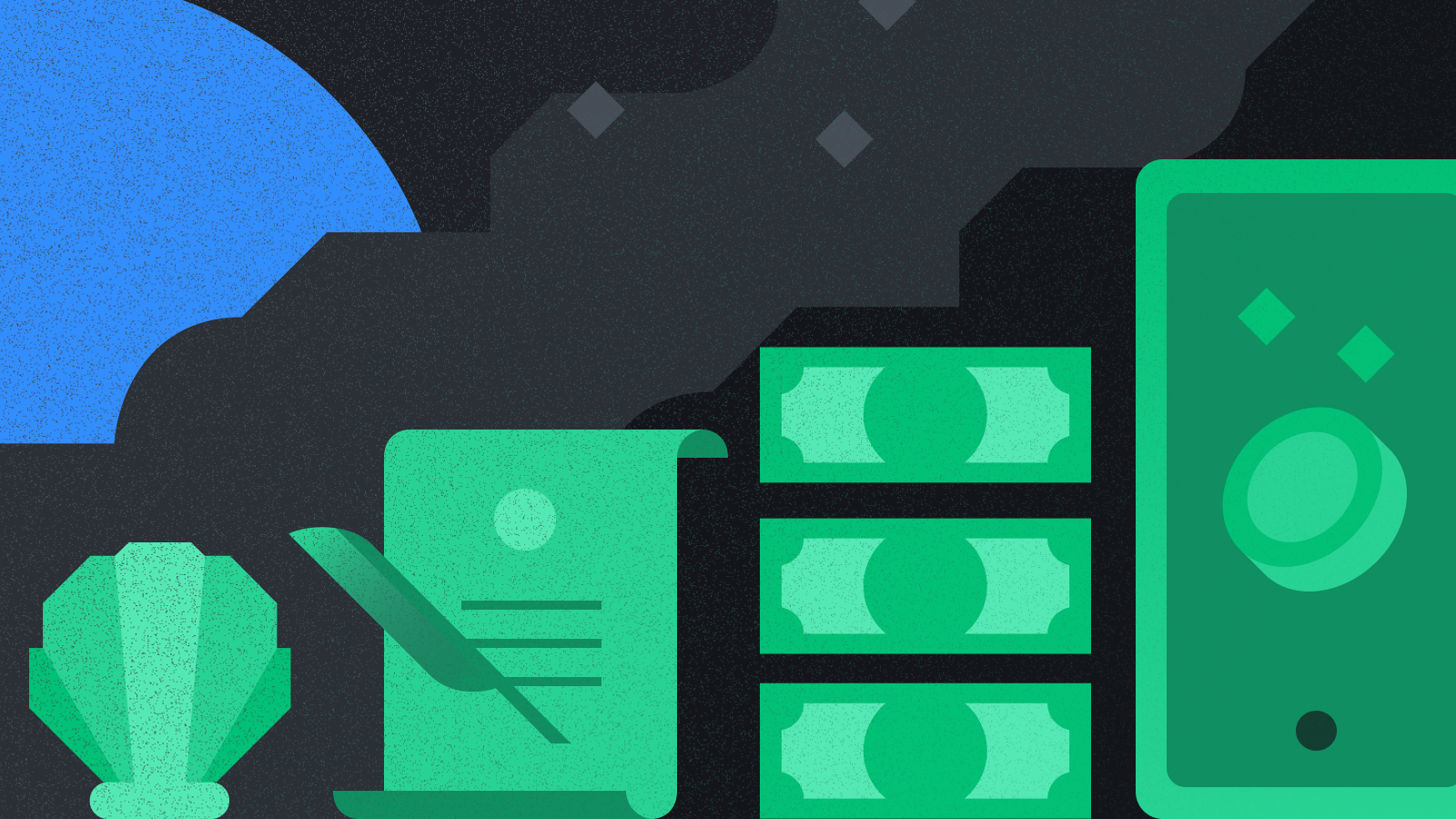 Home
Articles
What Is Money?

Money is undoubtedly one of the most important cornerstones of modern civilization. For millennia, it has served as a kind of language for value, facilitating trade between individuals, and allowing them to store the product of their labor.

Broadly speaking, the definition of money is something that’s widely accepted as payment for goods and services. Societies around the globe have spawned many different kinds of money – so many, that it’s difficult to neatly categorize them all.

In this article, we’ll distinguish between commodity money, representative money, and fiat money.

Barter refers to the act of exchanging goods or services for other goods or services. Interestingly, this can also be observed in other contexts of life. Species in the plant and animal kingdoms enter unspoken agreements – symbiotic relationships – wherein both benefit from each others’ actions. For instance, Bullhorn acacia trees provide food and shelter for ants in exchange for protection from parasites. Zebras and rhinos rid themselves of ticks by allowing oxpecker birds to feed on those that latch onto their skin.

Of course, humans have a different and more sophisticated grasp of value than the above species. Long before the appearance of money as we currently know it, we understood that we could trade our goods for the goods of others.

It couldn’t be more straightforward. Suppose that you have a coat and your neighbor has apples. She’s cold and you’re hungry. You give her the coat in exchange for twenty apples. Both of you got what you wanted by trading it for what you have.

Unfortunately, it won’t always be so simple. You’ll probably want more apples later, but your neighbor’s new coat will last her a couple of years. She may not want to trade again when you do. She might be out of luck herself if she wants to buy gas, but the gas station owner is allergic to apples and won’t accept them.

The phenomenon is known as the coincidence of wants in economics. Bartering works well when you have something that your counterparty wants, and vice versa. It fails when parties don’t need goods belonging to the other.

Commodities are raw materials that are useful in some way (some might say they have intrinsic value). This definition encompasses an extensive range of things – from metals like gold, silver, and copper to consumables like wheat, coffee, and rice.

It follows that commodity money involves the use of commodities as money. You’re unlikely to be able to spend oil at your local store, but there are countless examples throughout history of useful raw materials being established as currency.

For instance, tobacco was declared to be legal tender in Virginia back in the 1600s. As Nick Szabo details in his influential essay Shelling Out: The Origins of Money, Native American tribes used wampum (beads made from clam shells) and cowry shells as a means of exchange. Like the tobacco in Virginia, this commodity was also adopted as legal tender for decades.

On the surface, trading in commodities might not look too different from barter economies. After all, if you have a book and offer to sell it for rice, aren’t you doing the same thing we discussed earlier?

Functionally, yes, but commodity money acts as a medium of exchange. In this scenario, you would expect rice to be widely accepted as a means of payment for goods or services. So unlike barter economies, where you trade goods or services for other goods or services, rice would be an attractive medium for exchange in many trades.

You would, therefore, be inclined to calculate what your book is worth depending on what you could buy with rice. You accept the rice, not necessarily because you’re going to eat it, but because you can trade it for other goods. If the commodity in question is so prolific, it may also serve as a unit of account – something you use to price other goods. In such a world, the amount of money you pay for a coffee may well be expressed in kilograms of rice.

Commodity money sidesteps the coincidence of wants issue that you encounter with bartering. That’s because you can take the commodity money and use it in another trade later.

Precious metals, like gold and silver, are perhaps the most well-known forms of commodity money. Gold has persisted through civilizations, used as both money and as an industrial metal. Even today, gold coins and bullion are regarded as the quintessential store of value. Investors park their wealth in the precious metal to be able to access it at a later date. There are many reasons for which gold is revered – we explore the functions of money that it fulfills in Is Bitcoin a Store of Value?

Commodities haven’t gone away. As currencies, however, they’ve been largely replaced by other forms of money.

Commodity money was certainly an improvement over the barter system, but it still had shortcomings of its own, notably from a convenience perspective. While you could fit a handful of gold and silver coins in your pockets and use them to make small purchases, the concept doesn’t scale.

Can you imagine trying to make medium-to-large purchases with coins today? To give you an idea, if you wanted to buy a bitcoin from someone for 8,000 euros, you’d need to bring roughly 60kg of one euro coins with you.

After commodity money came representative money – a vastly more portable alternative backed by commodities. Representative money cropped up in different places around the world at different times. In essence, it involves a central issuer producing certificates that can be redeemed for a certain amount of that commodity.

Instead of carrying pounds of silver around, you could hold pieces of paper proving your ownership. At any time, you could go to the issuer and trade the paper in for the actual silver. Alternatively, you could give it to someone as payment, and they could redeem it themselves. If you’re familiar with stablecoins, it’s essentially the same principle.

There are occurrences of private companies issuing representative money, but it was done at a much larger scale by central banks. You’re probably familiar with the gold standard, a policy adopted by many governments where national currencies were backed by gold. It seems far detached from the system in place today, but less than a century ago, you could take paper money to the bank and swap it for precious metals.

From an economic standpoint, this had some substantial benefits. So substantial that the gold standard is still a term used to describe something that outperforms alternatives. The first advantage was that, while government intervention increased, the currency wasn't easily debased through inflation. Governments couldn’t issue banknotes exceeding the amount they were holding – in theory, at least. Unfortunately, it was easy (and attractive) for banks to operate a fractional reserve policy, where they created more notes than there was gold in storage.

The gold standard enabled individuals to transact with gold, without the inconvenience of carrying bullion around, or having to divide it up to make purchases.

Another benefit of this monetary system relates to the fact that gold has always been recognized on an international scale. If their domestic economies were gold-centric, then countries on the gold standard could more easily trade in a globally-appreciated resource.

Representative money is no longer the dominant form of money. The death of the gold standard saw a new kind of money adopted globally – one totally detached from commodities.

In short, fiat is money issued by a government (the term fiat stems from a Latin word meaning by decree). The United States dollars, Mexican pesos, Japanese yen, and Indian rupees used today are all examples of that.

The value of fiat money is highly dependent on the decisions of governments and central banks. At its core, a fiat banknote is a piece of paper that only has value because governing bodies say so.

It should be noted that, while it’s sometimes viewed as a recent invention, fiat in the form of paper money actually traces its origins back to 11th century China. It was also experimented with in 17th century Europe and the Americas for a couple of hundred years later.

Unlike the types of money we’ve discussed thus far, fiat currency has no element of scarcity. It’s trivial to produce paper currency from readily-available materials, unlike agricultural commodities that take time to grow, or precious metals that must be extracted. Without these limitations, entities like the Federal Reserve can create new money out of thin air.

Depending on who you ask, this is either its greatest strength or its greatest weakness. Proponents of fiat money systems argue that the ability to inflate the money supply gives governments more flexibility for tackling financial crises or managing the overall economy. By controlling the money market and interest rates, the government has a high degree of control over the country's financial affairs.

Funnily enough, the same argument is put forward by opponents of fiat currency, albeit in a different light. One of the main criticisms of government monetary policy is that inflation slowly erodes the wealth of fiat money holders. Unchecked, it can bring on an aggressive period of inflation (hyperinflation), which essentially debases the currency entirely and can cause massive economic and social damage.

Where does cryptocurrency come in?

Bitcoin has been labeled as both digital cash and digital gold. On the one hand, it mimics many of the characteristics of money seen in commodities (i.e., fungibility, divisibility, portability), making it an ideal medium of exchange.

On the other, it is increasingly appreciated for store of value properties. Proponents of Bitcoin as digital gold believe that its supply policy of deflation (or more correctly, disinflation) will help it retain purchasing power over time. This stands in stark contrast to inflationary monies like the U.S. dollar, which can be devalued at the discretion of a Federal Reserve system.

On the surface, cryptocurrencies appear to fall under the category of commodity money. While they don’t have any use outside of their protocols, they’re not backed by anything or issued by government entities. The value of money, where digital currencies are concerned, stems from the valuation given to it by the free market.

As we’ve seen, money takes many forms. Most of us are used to thinking about value in our national fiat currencies, but these are relatively recent inventions. The payment apps you use today are a result of thousands of years of monetary evolution.