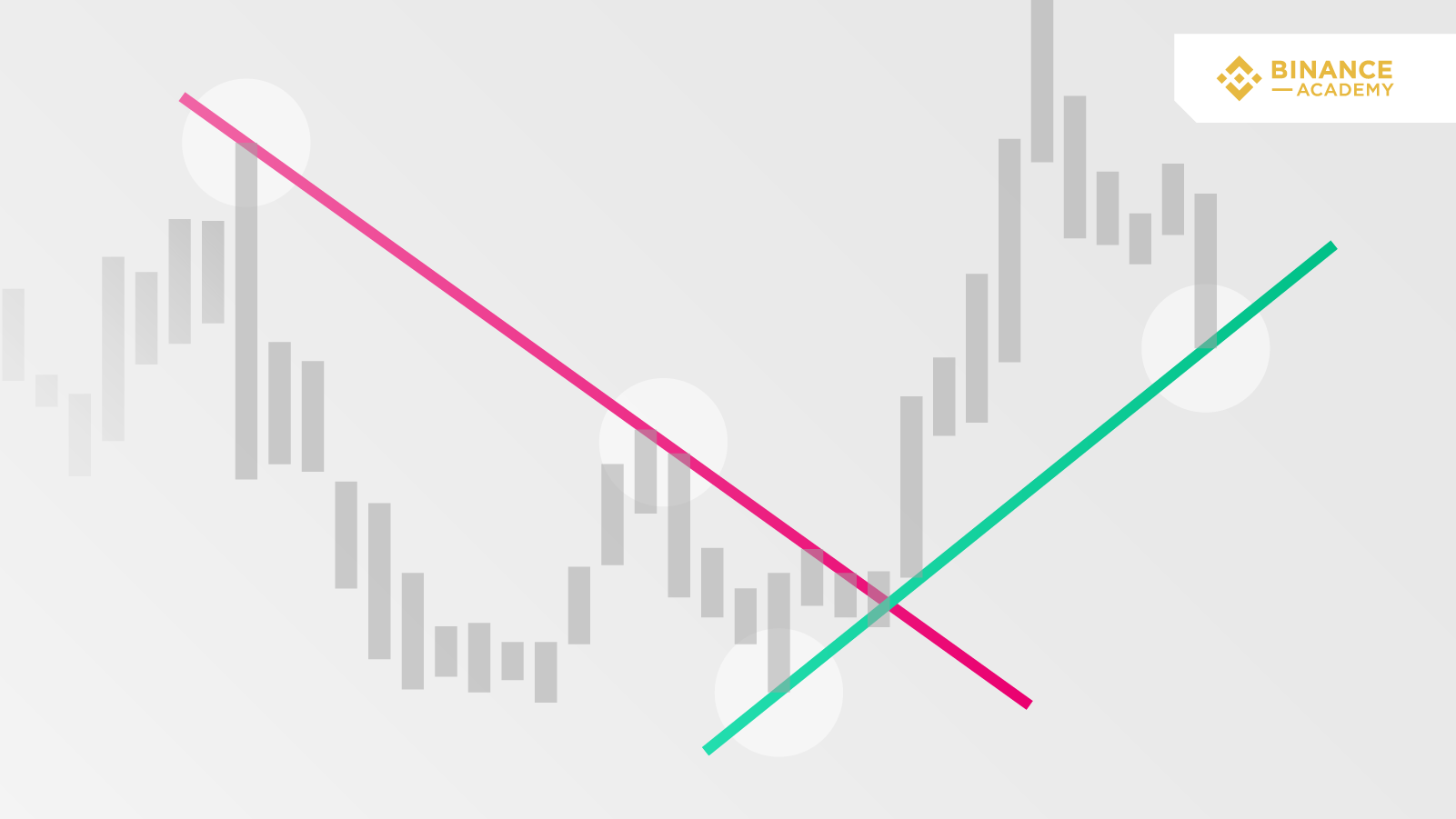 What are trend lines?

Trend lines are considered one of the most basic tools in technical analysis (TA). They are widely used in stock, fiat currency, derivatives, and cryptocurrency markets.
Essentially, trend lines work like support and resistance levels but are made of diagonals instead of horizontal lines. As such, they can have either a positive or negative slope. In general, the greater the slope of the line, the stronger the trend is.

We can divide trend lines into two basic categories: ascending (uptrend) and descending (downtrend). As the name suggests, an uptrend line is drawn from a lower to a higher chart position. It connects two or more low points, as illustrated in the image below.

In contrast, a downtrend line is drawn from a higher to a lower position in the chart. It connects two or more high points.

So, the difference between the two types of lines is the selection of the points that are used to draw them. In an uptrend, the lines will be drawn using the lowest points in the chart (i.e., candlestick bottoms forming higher lows). On the other hand, downtrend lines are drawn using the highest values (i.e., candlestick tops forming lower highs).

How to use trend lines

Based on the highs and lows of a chart, trend lines indicate where the price briefly challenged the prevailing trend, tested it, and then turned back in its favor. The line can then be extended to try and predict important levels in the future. The trend line may be tested several times, but as long as it isn’t broken, it is considered valid.

While trend lines can be used in all kinds of data charts, they are usually applied to financial charts (based on market prices). They provide insights into the market supply and demand. Naturally, upward trend lines indicate an increasing buying force (demand is higher than supply). Downward trend lines are associated with consistent price drops, suggesting the opposite (supply is higher than demand).

However, the trading volume should also be considered in such analyses. For instance, if the price is increasing, but the volume is decreasing or is relatively low, it may give a false impression of increased demand.
As mentioned, trend lines are used to identify support and resistance levels, which are two basic but very important concepts of technical analysis. An uptrend line shows support levels below which the price is unlikely to drop. In contrast, the downtrend line highlights resistance levels above which the price is unlikely to rise.

In other words, the market trend may be considered invalid when the support and resistance levels are broken, either to the downside (for an uptrend line) or to the upside (for a downtrend line). In many cases, when these key levels fail to hold the trend, the market tends to change direction.

Still, technical analysis is a subjective field, and each person may present a completely different method for drawing trend lines. Thus, it may be worth combining multiple TA techniques, as well as fundamental analysis to reduce risks.

Technically, trend lines can connect any two points in a chart. But, most chartists agree that using three points or more is what makes a trend line valid. In some cases, the first two points can be used to define a trend in potential, and the third point (extended in the future) can be used to test its validity.

So, when the price touches the trend line three or more times without breaching it, the trend can be considered valid. Testing the trend line multiple times indicates that maybe the trend is not a mere coincidence caused by price fluctuations.

In addition to choosing enough points to create a valid trend line, it’s important to consider proper settings when drawing them. Among the most important chart settings is the scale settings.

In financial charts, the scale relates to the manner in which the change in price is displayed. The two most popular scales are arithmetic and semi-logarithmic (semi-log). On an arithmetic chart, change is expressed evenly as the price moves up or down the Y-axis. In contrast, semi-log charts express variations in terms of percentage.

It’s important to consider the scale settings when drawing trend lines. Each type of chart may result in different highs and lows and, thus, slightly different trend lines.

While they are useful tools for technical analysis, trend lines are far from foolproof. The choice of points used to draw trend lines will affect the degree to which they accurately represent market cycles and real trends, making them somewhat subjective.

For instance, some chartists draw trend lines based on the body of the candlesticks, disregarding the wicks. Others prefer to draw lines according to the highs and lows of the wicks.

So, it’s important to use trend lines in conjunction with other charting tools and indicators. Notable examples of other TA indicators include the Ichimoku Clouds, Bollinger Bands (BB), MACD, Stochastic RSI, RSI, and moving averages.
What Is Shorting in the Financial Markets?
Jul 29, 2020
6m
What Is a Limit Order?
Dec 10, 2018
7m
What Is the Crypto Fear and Greed Index?
Jul 7, 2021
7m
I-explore ang lahat ng aming content