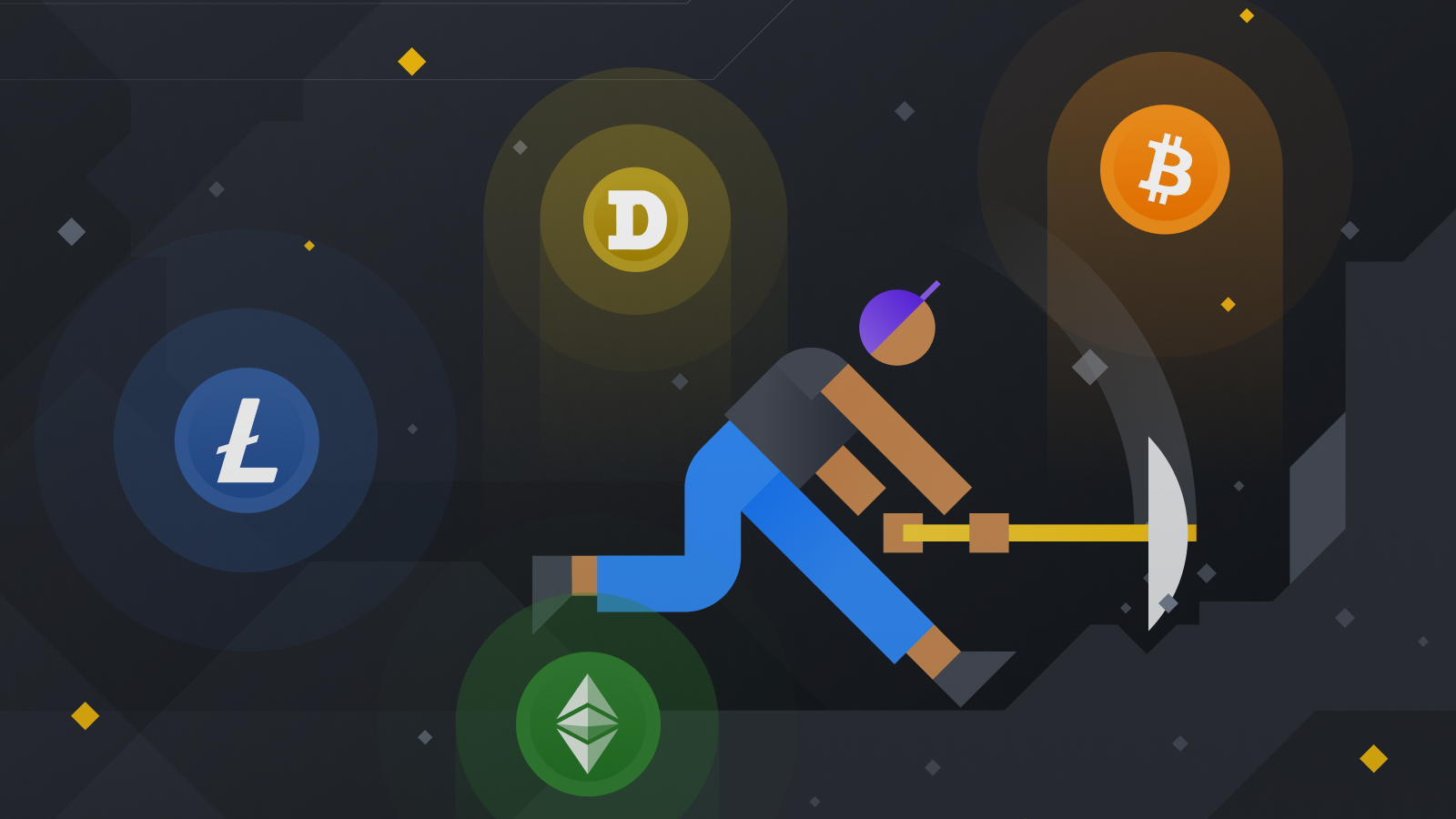 Home
Mga Artikulo
How to Mine Cryptocurrency?

How to Mine Cryptocurrency?

Bitcoin and many other blockchain networks use the Proof of Work (PoW) consensus algorithm for cryptocurrency mining. There are many possible ways to mine cryptocurrency; it can be done alone, or in conjunction with others. You can use special mining computers or even the devices already found at home, like your personal computer. While anyone can become a miner, not everyone becomes profitable from it. Before starting, mining requires studying, choosing the correct devices and programs, and some practical tinkering.

Before starting cryptocurrency mining, one should start with a bit of research. It's because different protocols may require unique hardware and software. While mining attracts various people to the cryptocurrency ecosystem due to its possible high rewards, it also enables them to partake in an integral role in making decentralized blockchains possible.

Cryptocurrency mining is a highly technical topic, and there is more than one way to do it. This article will cut through the noise and give a more practical idea about it.

What is cryptocurrency mining?

Blockchain networks use mining to create and validate new blocks of transactions and secure the network. In the process, the so-called miners use significant amounts of computational resources to create new units of cryptocurrencies, increasing their existing circulating supply.

Bitcoin, Litecoin (LTC), and many other blockchain networks use the Proof of Work (PoW) consensus algorithm for cryptocurrency mining. PoW determines how a blockchain network reaches consensus across all the distributed participants without third-party intermediaries. In addition, it solves the double-spend problem, preventing the network participants from using the same funds more than once.

PoW promotes good network participation by design. Miners compete by solving complex cryptographic puzzles with mining hardware to win the right to mine the next block. The first miner to find a valid solution and confirm their block of transactions receive rewards. Therefore, the process requires effort and is expensive, but it offers compensation for the work.

However, it's also possible to disrupt a blockchain with a so-called 51% attack. While very unlikely, especially for the larger blockchain networks, a single entity or organization could, in theory, take over 50% of the network's computing power. That amount of mining power would let the attacker intentionally exclude or alter the ordering of transactions, also enabling them to reverse their own transactions.

Another potential issue regarding cryptocurrency mining relates to its sustainability and expenses. Cryptocurrency mining requires significant investment, not only in hardware but also in energy. As a result, many miners, especially those that mine bitcoin (BTC), consume massive amounts of electricity. In addition, if a miner doesn't have access to several mining rigs and cheap electricity, the mining will unlikely ever turn into a profit.

Miners receive a block reward when they validate a block successfully. The more computing power the miners contribute to the network, the better their possibilities to validate the next block. Yet, as more miners join the game, validating blocks begin to require more computing power. Therefore mining can become too expensive for individual miners.

There is not just one way to mine cryptocurrency. So let's go through the major ones individually so that you can choose the right one regardless if you plan to mine as an individual or as part of a collective.

Unlike ASICs, graphics processing units (GPUs) can serve more than one purpose. Traditionally, their task in a computer is to process graphics and output them to a screen. GPU mining offers a lower entry to cryptocurrency mining because users can do it with affordable and more available hardware like standard laptops. Even though you can still mine some altcoins with GPUs, their efficiency depends on the mining difficulty and algorithm.

A central processing unit (CPU) is the primary component that operates computers. CPU mining lets you use the idle power from your computer to mine cryptocurrency. Even bitcoin was mined at the beginning using a CPU, but nowadays, CPUs are no longer the most efficient for cryptocurrency mining due to their power constraints.

Mining pools refer to a group of miners that join forces to combine their computing power (also known as hashing power or hash rate). As their probability of finding new blocks rises, they can earn more collectively and share the rewards. Many miners join mining pools to get a more steady and predictable outcome.

Solo mining is the opposite of mining pools because it doesn't require other participants. In solo mining, a miner executes the mining process alone. However, especially with major cryptocurrencies, it's harder for miners to succeed due to the increasing competition from the enormous combined processing power of mining pools.

In cloud mining, you outsource computational work from a cloud-mining farm. It usually consists of you paying for someone else to mine on your behalf. Therefore, it can make the mining process easier to start because it doesn't require specialized hardware to mine cryptocurrency. In addition, miners rent computing power from a company that can be located anywhere in the world, which means there are no electricity bills or storage issues either. However, this option can be risky as there is no guarantee that you will receive the rewards of your investment. Many of these services have even turned out to be scams.

How to mine crypto?

Mining has the potential to become a passive income source. You can follow this step-by-step overview guide to start mining on your own. However, keep in mind there are various approaches and techniques to mining. Therefore, these steps might not be effective for some mining methods, and others might require extra measures.

Also, note that mining is not always an easy or profitable endeavor as it can be at the mercy of fluctuating crypto prices and changing energy costs. It requires you to configure the mining devices correctly and demands some expenditures to keep the operation running on top of the initial investment.

The biggest cryptocurrencies have conditions that are incredibly challenging to satisfy, and, therefore, it's harder for individual miners to earn revenue. For this reason, bitcoin miners use powerful ASICs and mining pools to increase their chances of getting rewarded.

It’s common to mine Proof of Work (PoW) cryptocurrencies other than bitcoin, such as Dogecoin and Ethereum Classic. Altcoin networks might not be as congested and offer better chances for smaller miners. Altcoins might also offer higher growth potential due to their untapped potential. In addition, miners can use less energy-consuming mining options as they don't require so much computational power.

However, take into consideration that altcoin mining can be more volatile. Or, in the worst case, the protocol can get hacked or abandoned, and the tokens could become worthless. Also, it may be that you will need to renew the mining rigs and spend more money than you initially planned due to the growing popularity of specific cryptocurrencies. For example, in the beginning, miners could use just their laptops to mine bitcoin, which is not the case anymore.

Cryptocurrency mining is one kind of competition. In the mining competition, miners benefit from powerful mining hardware because their probability of mining the next block grows. As mentioned, ASIC miners are designed to serve a single specific purpose, which makes them often the best option for cryptocurrency mining. Nevertheless, GPUs are also still viable in some networks, but their efficiency depends on the cryptocurrency's mining difficulty and algorithm.

There are also some cryptocurrencies that require mining rigs designed especially for them. For example, Helium's crypto miner uses radio technology – the device is installed in a place with an unrestricted view in order to provide wireless network coverage. Therefore, always ensure what kind of hardware is necessary for the cryptocurrency you intend to mine.

3. Set up a crypto wallet

Cryptocurrency mining requires you to download specialized mining software. The best way to access the software is from the website of the cryptocurrency you intend to mine. This way, you can make sure that you will have the right software for a specific cryptocurrency and avoid fake programs.

Most mining software are free to download and use. In addition, some cryptocurrencies have multiple software to choose from, and they are often available for various operating systems. It's always good to do your own research (DYOR) before choosing the mining software to understand their differences.

Another helpful part of setting up the mining device is to create a strategy to monitor electricity costs. You can start by checking the previous electricity bills and evaluating how much the mining will cost. The unfortunate fact is that the energy consumption of a mining rig might result in you spending more money on electricity than the value earned from mining.

In addition, remember that the mining rigs make noise and warm up. Therefore, consider placing them in a safe location where they are adequately cooled and notifying your neighbors about the possible extra hum.

Mining pools can help you as an individual miner in terms of hardware and electricity costs. As a block reward is granted to the first successful miner, it's very unlikely that you are the one to guess the correct hash. For example, even if you would run several high-powered ASICs, you would still be just a microscopic part of the total Bitcoin hashing power.

Mining pools raise a bigger pool of mining power, so the chance of discovering the next block is increased. In other words, if you combine your hashing power with a mining pool,  you could possibly earn more than doing the mining alone.

Mining pools typically have a coordinator who organizes the miners so they are less likely to make mistakes. For example, coordinators should ensure that miners use different nonce values to avoid wasting hash power. Often, coordinators are also responsible for splitting the mining rewards to each pool member..

Is cryptocurrency mining worth it?

Mining is one of the possibilities that people can consider when trying to produce passive income streams. It can become low-effort once the miner setup functions correctly and is connected to the network.

But, of course, it won’t be completely passive as it will demand tasks like hardware maintenance, software updates, paying electricity bills, etc.

However, even though mining can be passive, it's not necessarily profitable. For example, the underlying cryptocurrency's volatility can result in smaller overall rewards than the miner's electricity costs.

The profitability of a mining operation depends on its size and location. For example, the largest cryptocurrency mining farms are strategically located in countries with the lowest electricity costs. In addition, some places also have volatile electricity prices that can interfere with mining.

Some people choose to mine cryptocurrency purely to support the decentralization and security of blockchains. Sometimes, even without any goal of profit.

Mining is essential for blockchains because it helps secure the network while creating and validating new blocks of transactions. While anyone can start cryptocurrency mining, it’s essential to consider the costs and risks.

Mining also requires a certain degree of technical knowledge, especially when acquiring and setting up your mining equipment. It’s important to do your own research and understand the specifics of the cryptocurrency you want to mine. You will also need to set up a crypto wallet to receive potential mining rewards.

But, remember, the crypto ecosystem changes rapidly, so keep your eye on the project developments and updates because they can change how cryptocurrency mining happens.