What Is Layer 1 in Blockchain?
Table of Contents
Introduction
What is layer 1?
Layer 1 scaling
What is layer-1 sharding?
Layer 1 vs. Layer 2
Layer 1 blockchain examples
Closing thoughts
BlockchainDeFiAltcoin 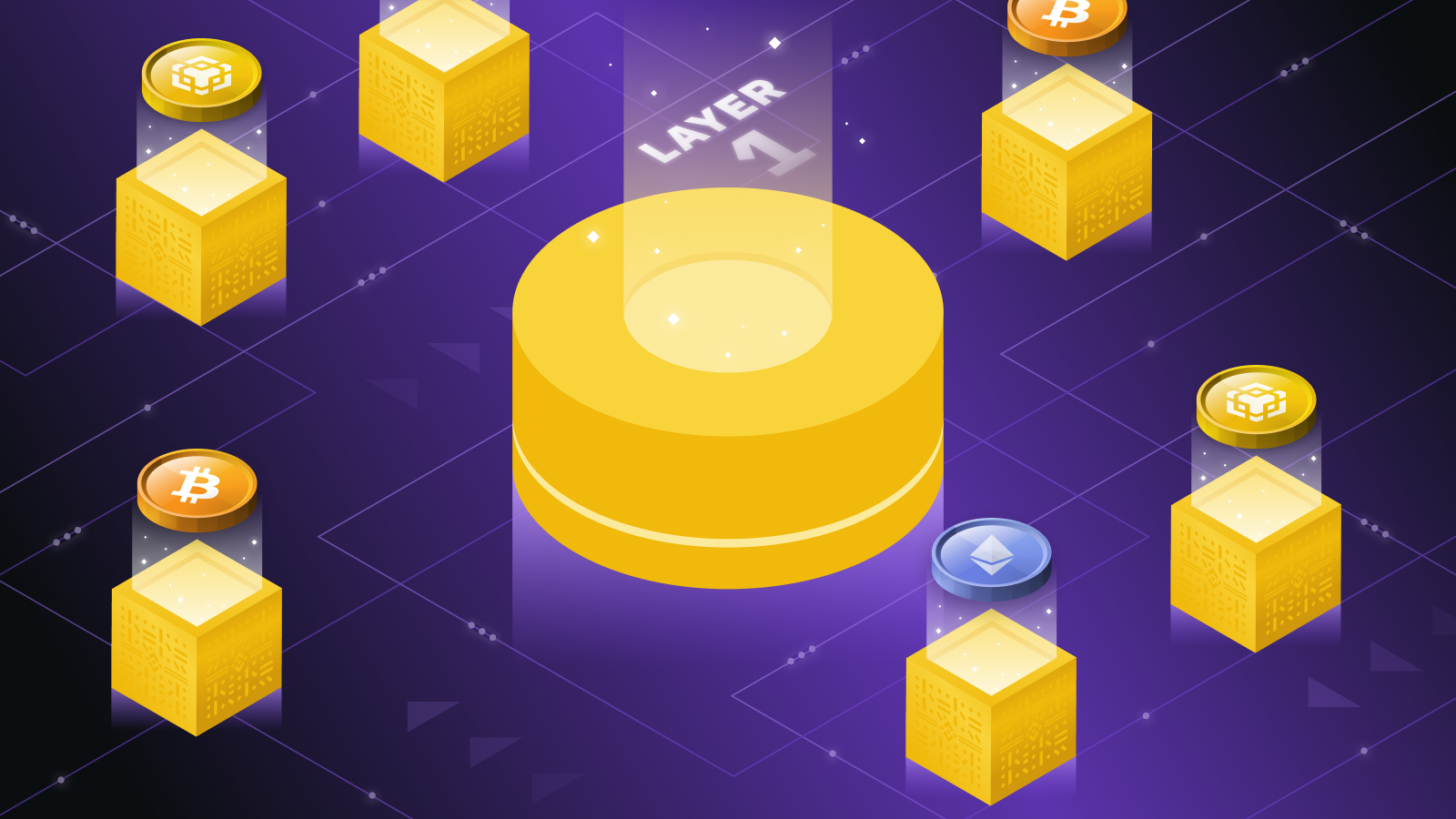 HomeArticles
What Is Layer 1 in Blockchain?

What Is Layer 1 in Blockchain?

Layer 1 refers to a base network, such as Bitcoin, BNB Chain, or Ethereum, and its underlying infrastructure. Layer-1 blockchains can validate and finalize transactions without the need for another network. Making improvements to the scalability of layer-1 networks is difficult, as we’ve seen with Bitcoin. As a solution, developers create layer-2 protocols that rely on the layer-1 network for security and consensus. Bitcoin's Lightning Network is one example of a layer-2 protocol. It allows users to make transactions freely before recording them into the main chain.

Layer 1 and layer 2 are terms that help us understand the architecture of different blockchains, projects, and development tools. If you've ever wondered about the relationship between Polygon and Ethereum or Polkadot and its parachains, learning about the different blockchain layers will help.

A layer-1 network is another name for a base blockchain. BNB Smart Chain (BNB), Ethereum (ETH), Bitcoin (BTC), and Solana are all layer-1 protocols. We refer to them as layer-1 because these are the main networks within their ecosystem. In contrast to layer-1, we have off-chains and other layer-2 solutions that are built on top of the main chains.
In other words, a protocol is layer 1 when it processes and finalizes transactions on its own blockchain. They also have their own native token, used to pay for transaction fees.

A common problem with layer-1 networks is their inability to scale. Bitcoin and other big blockchains have been struggling to process transactions in times of increased demand. Bitcoin uses the Proof of Work (PoW) consensus mechanism, which requires a lot of computational resources.

While PoW ensures decentralization and security, PoW networks also tend to slow down when the volume of transactions is too high. This increases transaction confirmation times and makes fees more expensive.

Blockchain developers have been working on scalability solutions for many years, but there is still a lot of discussion going on regarding the best alternatives. For layer-1 scaling, some options include:

1. Increasing block size, allowing more transactions to be processed in each block.
2. Changing the consensus mechanism used, such as with the upcoming Ethereum 2.0 update.

Layer 1 improvements require significant work to implement. In many cases, not all the network users will agree to the change. This can lead to community splits or even a hard fork, as happened with Bitcoin and Bitcoin Cash in 2017.

One example of a layer-1 solution for scaling is Bitcoin's SegWit (segregated witness). This increased Bitcoin's throughput by changing the way block data is organized (digital signatures are no longer part of the transaction input). The change freed up more space for transactions per block without affecting the network's security. SegWit was implemented via a backward-compatible soft fork. This means that even the Bitcoin nodes that are not yet updated to include SegWit are still able to process transactions.

What is layer-1 sharding?

Sharding is a popular layer-1 scaling solution used to increase transaction throughput. The technique is a form of database partitioning that can be applied to blockchain distributed ledgers. A network and its nodes are divided into different shards to spread the workload and improve transaction speed. Each shard manages a subset of the whole network's activity, meaning it has its own transactions, nodes, and separate blocks.

With sharding, there is no need for each node to maintain a full copy of the entire blockchain. Instead, each node reports back the work completed to the main chain to share the state of their local data, including addresses’ balance and other key metrics.

When it comes to improvements, not everything is solvable on layer 1. Due to technological constraints, certain changes are difficult or almost impossible to do on the main blockchain network. Ethereum, for example, is upgrading to Proof of Stake (PoS), but this process has taken years to develop.
Some use-cases simply cannot work with layer 1 due to scalability issues. A blockchain game could not realistically use the Bitcoin network due to the lengthy transaction times. However, the game may still want to use layer 1's security and decentralization. The best option is to build on top of the network with a layer-2 solution.

Layer-2 solutions build on layer 1 and rely on it to finalize its transactions. One famous example is the Lightning Network. The Bitcoin network under heavy traffic can take hours to process transactions. The Lightning Network lets users make speedy payments with their Bitcoin off the main chain, and the final balance is reported back to the main chain later. This essentially bundles everyone's transactions into one final record, saving time and resources.

Now that we know what layer 1 is, let's look at some examples. There's a huge variety of layer-1 blockchains, and many support unique use cases. It's not all Bitcoin and Ethereum, and each network has different solutions to the blockchain technology trilemma of decentralization, security, and scalability.

Elrond is a layer-1 network founded in 2018 that uses sharding to improve its performance and scalability. The Elrond blockchain can process over 100,000 transactions per second (TPS). Its two unique main features are its Secure Proof of Stake (SPoS) consensus protocol and Adaptive State Sharding.

Adaptive State Sharding happens via shard splits and merges as the network loses or gains users. The network's whole architecture is sharded, including its state and transactions. Validators also move between shards, reducing the chance of a malicious takeover of a shard.

Elrond's native token EGLD is used for transaction fees, deploying DApps, and rewarding users that participate in the network's validation mechanism. Also, the Elrond network is certified Carbon Negative, as it offsets more CO2 than its PoS mechanism is accountable for.

Harmony is an Effective Proof of Stake (EPoS), layer-1 network with sharding support. The blockchain's mainnet has four shards, each creating and verifying new blocks in parallel. A shard can do this at its own speed, meaning they can all have different block heights.
Harmony currently uses a "Cross-Chain Finance" strategy to attract developers and users. Trustless bridges to Ethereum (ETH) and Bitcoin play a key role, allowing users to exchange their tokens without the usual custodial risks seen with bridges. Harmony’s main vision for scaling Web3 relies on Decentralized Autonomous Organizations (DAOs) and zero-knowledge proofs.
The future of DeFi (Decentralized Finance) seems set on multi-chain and cross-chain opportunities, making Harmony's bridging services attractive to users. NFT infrastructure, DAO tooling, and inter-protocol bridges are the major areas of focus.

Its native token, ONE, is used to pay network transaction fees. It can also be staked to participate in Harmony's consensus mechanism and governance. This provides successful validators with block rewards and transaction fees.

Celo is a layer 1 network forked from Go Ethereum (Geth) in 2017. It has, however, made some significant changes, including implementing PoS and a unique address system. The Celo Web3 ecosystem includes DeFi, NFTs, and payment solutions, with more than 100 million transactions confirmed. On Celo, anyone can use a phone number or email address as a public key. The blockchain is easily run with standard computers and doesn't require special hardware.
Celo’s main token is CELO, a standard utility token for transactions, security, and rewards. The Celo network also has cUSD, cEUR, and cREAL as stablecoins. These are generated by users, and their pegs are maintained by a mechanism similar to MakerDAO’s DAI. Also, transactions made with Celo stablecoins can be paid with any other Celo asset.

CELO’s address system and stablecoin aim to make crypto more accessible and improve adoption. The volatility of the crypto market and difficulty for newcomers can be discouraging to many.

In effect, THORChain acts as a vault manager that monitors deposits and withdrawals. This helps create decentralized liquidity and removes centralized intermediaries. RUNE is THORChain's native token, used for paying transaction fees and also in governance, security, and validation.

THORChain's Automated Market Maker (AMM) model uses RUNE acting as the base pair, meaning you can swap RUNE for any other supported asset. In a way, the project works like a cross-chain Uniswap, with RUNE being a settlement and security asset for liquidity pools.

Kava is a layer-1 blockchain that combines the speed and interoperability of Cosmos with the developer support of Ethereum. Using a “co-chain” architecture, the Kava Network features a distinct blockchain for both the EVM and Cosmos SDK development environments. Coupled with IBC support on the Cosmos co-chain, this enables developers to deploy decentralized applications that interoperate seamlessly between the Cosmos and Ethereum ecosystems.

Kava uses the Tendermint PoS consensus mechanism, providing powerful scalability to the applications on the EVM co-chain. Funded by the KavaDAO, the Kava Network also features open, on-chain developer incentives designed to reward the top 100 projects on each co-chain based on usage.

Kava has a native utility and governance token, KAVA, and a US-dollar pegged stablecoin, USDX. KAVA is used to pay for transaction fees and is staked by validators to generate network consensus. Users can delegate their staked KAVA to validators to earn a share of KAVA emissions. Stakers and validators can also vote on governance proposals that dictate the parameters of the network.

IoTeX is a layer 1 network founded in 2017 with a focus on combining blockchain with the Internet of Things. This gives users control over the data their devices generate, allowing for “machine-backed DApps, assets, and services”. Your personal information has value and managing it via blockchain guarantees secure ownership.

IoTeX’s combination of hardware and software provides a new solution for people to control their privacy and data without sacrificing user experience. The system that enables users to earn digital assets from their real-world data is called MachineFi.

IoTeX released two notable hardware products known as Ucam and Pebble Tracker. Ucam is an advanced home security camera that allows users to monitor their homes from anywhere and with complete privacy. Pebble Tracker is a smart GPS with 4G support and track-and-trace capabilities. It not only tracks GPS data, but also environmental data in real time, including temperature, humidity, and air quality.

In terms of blockchain architecture, IoTeX has a number of layer 2 protocols built on top of it. The blockchain provides tools to create customized networks that use IoTeX for finalization. These chains can also interact with one another and share information via IoTeX. Developers can then easily create a new sub-chain to meet the specific needs of their IoT device. IoTeX’s coin, IOTX, is used for transaction fees, staking, governance, and network validation.

Today’s blockchain ecosystem has several layer-1 networks and layer-2 protocols. It’s easy to get confused, but as soon as you grasp the basic concepts, it becomes easier to understand the overall structure and architecture. This knowledge can be useful when studying new blockchain projects, especially when they focus on network interoperability and cross-chain solutions.