How to Use a Bitcoin Blockchain Explorer
امواد کا جدول
Introduction
What is a blockchain explorer?
How does a block explorer work?
How to view the 10,000 bitcoin pizza transaction
Closing thoughts
Essentials
Tutorials 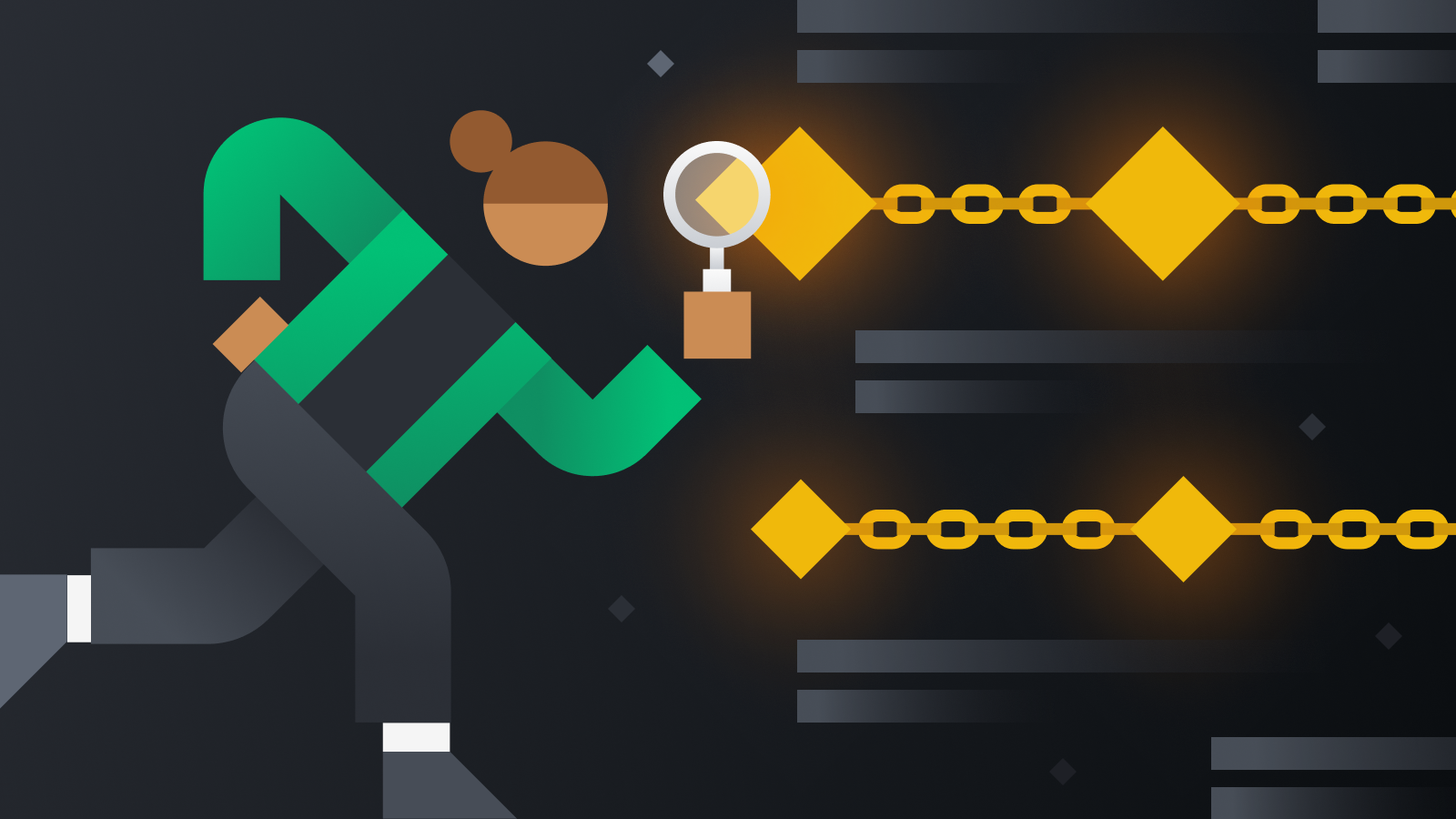 ہوم
آرٹیکلز
How to Use a Bitcoin Blockchain Explorer

How to Use a Bitcoin Blockchain Explorer

Public transparency is a key concept in cryptocurrencies. One of the great promises of blockchain is that it levels the playing field by not restricting information to a handful of people who are in a privileged position of control.

But what does that mean exactly? Can you find out how much bitcoins your neighbor owns? How can you take a look and verify public data yourself? That’s exactly what we’re going to show you in this article. Note that we focus on Bitcoin, but you can also find dedicated blockchain explorers for Litecoin, Ethereum, Binance, and pretty much any native blockchain.

Have you ever had a payment go missing, or someone who swore that they paid you didn’t? In our current financial system, this can end up being a “he said, she said” situation or may require a third-party intervention.

Blockchains solve this problem by introducing the concept of public transparency, where information is ready to be viewed by anyone at any time. For blockchains such as Bitcoin and Ethereum, all information is publicly visible by design, which is useful when transactions (or Txs) and contracts need to be easily identified and verified.

What is a blockchain explorer?

A blockchain explorer is like a search engine that reveals information about the past and current state of a blockchain. This can be useful when you want to track the progress of a specific payment or check the balance and history of an address. Anyone with an Internet connection can use an explorer to view all transactions of a public blockchain.

How does a block explorer work?

Every blockchain will have a Command Line Interface (CLI) to interact with the database and view the network’s history. However, a CLI explorer isn’t a user-friendly experience for the general public. That is why most blockchains will also have an explorer with a Graphical User Interface (GUI) that will display information in a friendlier format.

Let’s explore one of the commonly used Bitcoin explorers: blockchain.com. Other alternatives for BTC include blockchair.com and blockcypher.com. 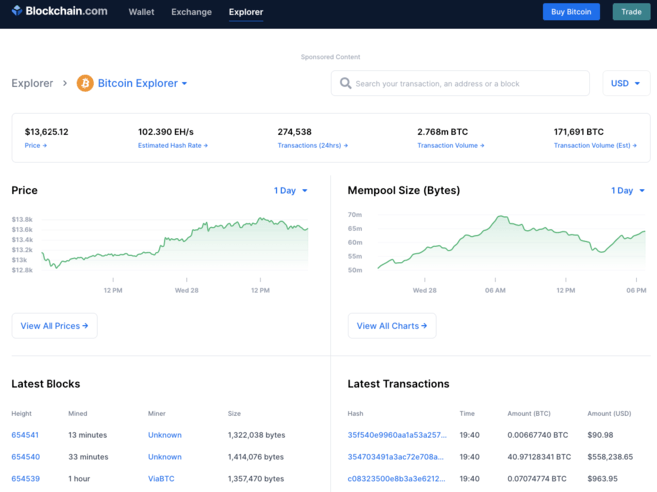 On the front page, you can see some high-level data about the Bitcoin blockchain. This includes the price, estimated hash rate, daily number of transactions, and transaction volume. We also see charts mapping price and mempool size. At the bottom, we can monitor the latest blocks and transactions.

Let’s go through what we can see here in a bit more detail:

There are additional metrics about the blockchain that you can track on this page, including network difficulty, fees per transaction, and average confirmation times. Some blockchain explorers will also let you connect to their API.

How to view the 10,000 bitcoin pizza transaction

Pizza Day is an auspicious day in Bitcoin history commemorating the purchase of two large pizzas in exchange for 10,000 bitcoin. Using our block explorer, we can view and explore details about this famous transaction.

Copying the transaction hash into the search field of the Bitcoin blockchain explorer will take us to the Pizza Day transaction. If you don’t want to copy-paste the details, here is a link to the transaction page.

At the top of the page, you can see a summary of the transaction inputs and outputs. On the left are the bitcoins paid for the pizza (totaling 10,000 BTC). These were sent to the single address on the right (belonging to the pizza delivery person).

If you click on the receiving address (on the right), you’ll see its transaction history. You can also scan the QR-code to get the respective address string. The QR-codes are very useful when making payments with TrustWallet or other mobile crypto wallets.

If you return to the original Pizza Day transaction page, you can scroll down to check the transaction details. These include the unique hash for the transaction, the confirmation status, the timestamp, the number of confirmations, the total input and output, the miner fees, and more. You can see there was a transaction fee of 0.99 BTC paid to the miner on top of the 10,000 BTC for the pizzas. 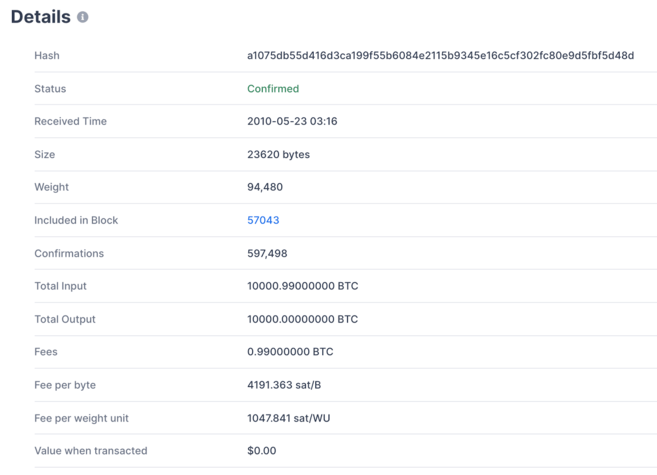 Clicking the block height (57,043) will give you details about the block in which this transaction was included. 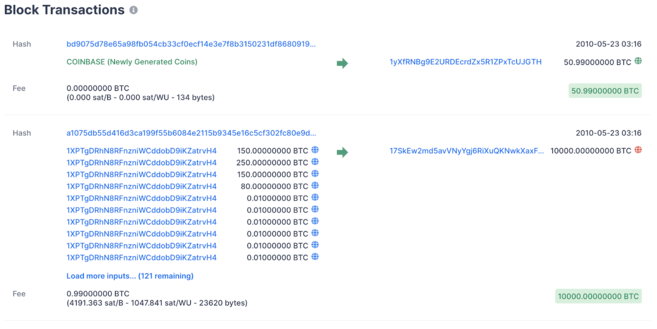 The green and red globes on the right side indicate whether the bitcoins were spent or not after this transaction. The person who sold the pizzas has already sent those 10,000 BTC to another address, but the miner’s address still holds the block reward (50.99 BTC).

Blockchain explorers are useful tools that harness the open and transparent nature of public blockchains. They provide useful information about the state of the network, including transaction and address history. This allows for easy tracking and verification.

However, this emphasis on full public transparency can lead to mapping the history of transactions and addresses known as chain analysis. This can unmask the pseudonymous nature of the addresses, especially for users that tend to use the same addresses multiple times (not recommended). Other public blockchains (such as Monero) strike a different balance between transparency and privacy.

Now that you have a rough understanding of how blockchain explorers work, have a play with them yourself. You might be surprised by what secrets you uncover!