What Is Algorand (ALGO)?
Table of Contents
Introduction
What is Algorand?
What is the Algorand Foundation?
How does Algorand work?
What is ALGO?
What are ALGO’s use cases?
How to Buy ALGO on Binance
How to Sell ALGO on Binance
Conclusion
Tech
Blockchain
Consensus
Altcoin 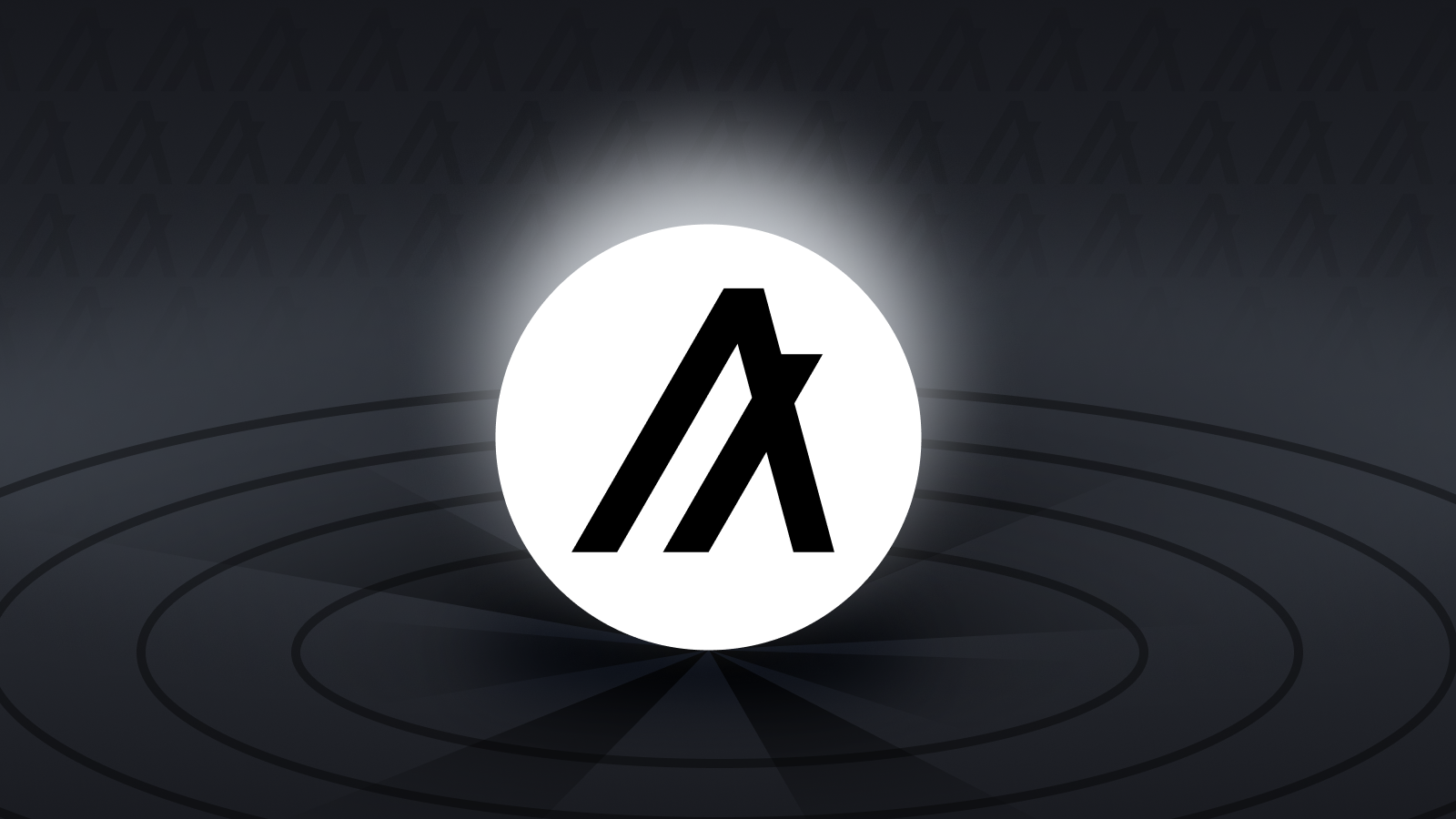 Home
Articles
What Is Algorand (ALGO)?

What Is Algorand (ALGO)?

Algorand was founded in 2017 before launching its mainnet and ALGO token in June 2019. The blockchain deals with the common scalability and consensus mechanism issues common to first and second-generation blockchains. Algorand's main feature is its Pure Proof of Stake consensus protocol that randomly selects validators weighted by their staked ALGO coin.

Users who participate in consensus have the chance of being selected to propose and validate a new block, which is then verified by a randomly-selected committee. Once the block is added to the blockchain, all transactions are considered confirmed. If the block is deemed bad, a new user is selected as a validator, and the process starts again.

The system's main strength is its decentralization of power, as every single staker has the chance to be a validator. Apart from consensus, ALGO is also used for network transaction fees. If you want to buy or sell ALGO, you can easily do so through Binance's convert feature or exchange view.

Algorand is a fairly new blockchain focused on improving scalability without sacrificing decentralization. This problem is common to many of the first and second-generation blockchains, such as Bitcoin and Ethereum. To achieve this, Algorand developed perhaps its most notable feature: the Pure Proof of Stake (PPoS) consensus mechanism. The scalability, security and decentralization of PPoS has attracted many large institutions and companies to use Algorand as the infrastructure layer to solve real-world problems that require scale, speed and cost efficiency..

Algorand is a blockchain network and project founded in 2017 by Professor Silvio Micali, a computer scientist from MIT that has won the Turing Award and is considered one of the forefathers of modern cryptography. The mainnet network launched in June 2019 along with its native cryptocurrency, ALGO. As mentioned, the blockchain focuses on improved scalability and also supports smart contracts. The Algorand network is a public, decentralized, Pure Proof-of-Stake blockchain with support for customized layer-1 blockchains. These can be used to create blockchains tailored for specific uses. The project claims it has solved the trilemma and its technology is particularly useful for financial services, Decentralized Finance (DeFi), fintech, institutions and the creator economy.

What is the Algorand Foundation?

The Algorand Foundation is a non-profit organization launched in 2019 that funds and develops the Algorand ecosystem. It also carries out important work in the blockchain's community, research, and governance.

For example, the Foundation has educated developers in universities and supported Algorand projects in its ecosystem with accelerator programs. However, technical development work is carried out by the private company Algorand Inc. The Algorand Foundation is also a large holder of ALGO, which it uses to fund its activities.

How does Algorand work?

The key to Algorand's scalability comes from its Pure Proof of Stake consensus mechanism. This protocol allows it to process many transactions quickly without sacrificing decentralization. Proof of Stake (PoS) blockchains are scalable but often at the cost of a small number of validators who have large stakes dominating block approvals. Proof of Work (PoW) has the same issue as large mining pools almost always win the race to create new blocks.

In contrast, Algorand’s PPoS consensus mechanism chooses validators and block proposers randomly from anyone who has generated a participation key. The chance of being chosen is directly related to the proportion of the participant’s stake of the overall amount staked.

Naturally, a small holder will have lower chances of being selected than a big holder. But unlike other PoS blockchains, Algorand doesn’t require a minimum stake, which is a significant barrier to entry for the average user. With every staker who runs a node being a possible validator, the network's security is more decentralized than with a chosen set of validators, such as in Delegated Proof of Stake (DPoS).

Currently, Algorand’s Pure Proof of Stake protocol delivers blocks with instant finality every 3.7 seconds on average, and processes up to 6,000 transactions per second (TPS).

Once users have generated their participation key, they become participation nodes with as little as 0.1 ALGO. Communication between these nodes happens through Algorand relay nodes. The block proposal phase then selects multiple block proposers using a Verifiable Random Function (VRF), considering the proportion of each validator's stake. Once block proposers are chosen, their identity is kept secret until the new block is proposed along with the VRF output to prove their legitimacy. This improves network security as bad actors cannot maliciously target the chosen validator. Soft vote stage

Once a block is submitted, participation nodes are selected randomly to join the soft vote committee. This stage filters proposals, so only one candidate can add to the blockchain. Voting power on the soft committee is proportional to the amount each account has staked, and votes are used to select a proposed block with the lowest VRF hash. This means that it will be impossible to preemptively attack the proposer of a block, as the lowest VRF hash is a value that is impossible to predict.

Next, a new committee is created to check for double-spending and the integrity of transactions in the block from the soft vote stage. If the committee deems the work valid, the block is added. If not, the block is rejected, the blockchain enters recovery mode, and a new block is selected. There’s no slashing penalty for the leader who proposes a bad block, making it a controversial part of the PPoS consensus mechanism. The chance of a fork with Algorand is extremely rare, as only one block proposal reaches the certify stage at a time. Once the block is added, all transactions are then treated as final.

ALGO is the native token of Algorand and has a maximum total supply of 10 billion coins to be distributed by 2030.

What are ALGO’s use cases?

Like many other native coins, ALGO has three primary use cases:

1. ALGO can be used to pay transaction fees on the Algorand Network. Compared to networks like Ethereum (ETH) and Bitcoin (BTC), Algorand has minimal fees (0.001 ALGO). As of October 2022, it costs only $0.0003 per transaction.

2. ALGO can be registered to have a chance of being selected as a block proposer or validator.

3. ALGO can be used to participate in the Governance Program, to vote on important measures regarding the future of the protocol, which also rewards its participants.

The third use case provides a large incentive for the average user investing in ALGO. There's no need to deal with a Decentralized Application (DApp) to register your coins for Governance.

Algorand also publishes a list of projects adopting the blockchain's technology, many of which require ALGO to be used.

How to Buy ALGO on Binance

1. Log in to your Binance account and hover over the [Buy Crypto] header at the top left of the homepage. In the drop-down menu, select [Credit/Debit Card].

2. Next, select the fiat currency you'll pay with your card in the top field. In the bottom field, choose ALGO. 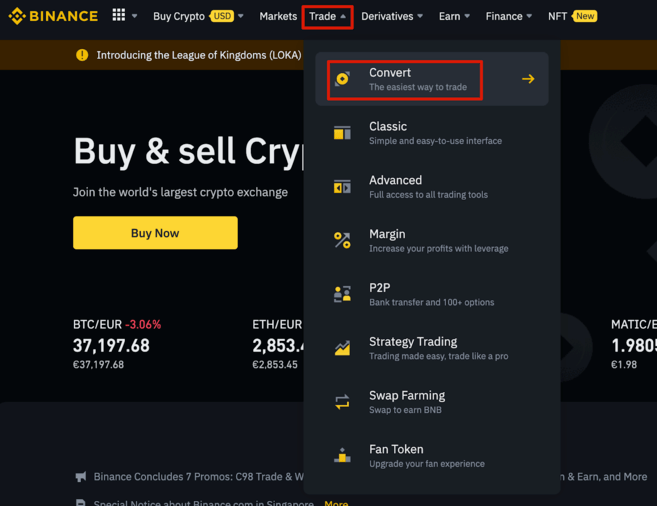 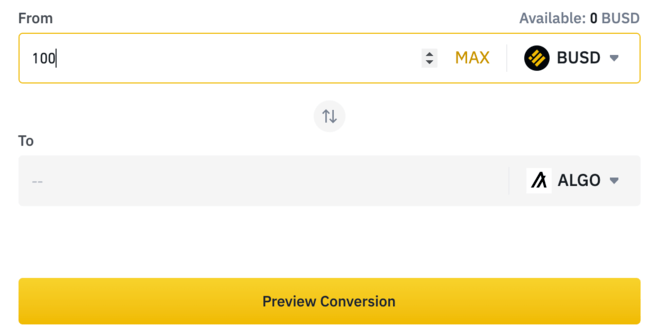 7. You'll now see a preview of the amount of ALGO you'll receive with clear instructions on how to proceed. Once you have swapped, the ALGO will be in your Spot Wallet. 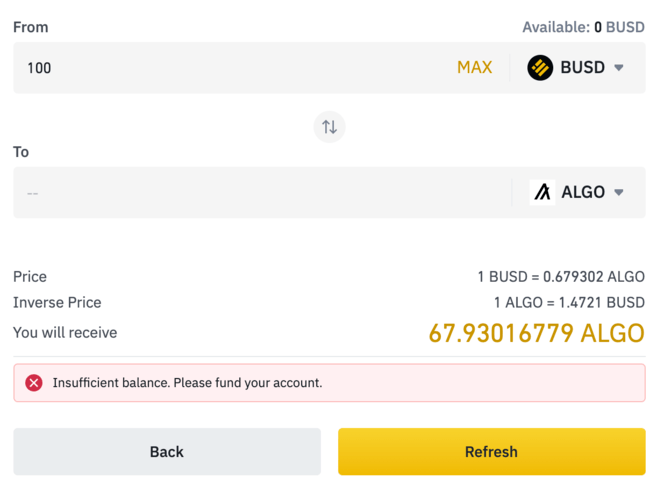 8. You can also trade using the Spot exchange view and search for all available ALGO pairs on the right side of the screen.

How to Sell ALGO on Binance

1. To sell ALGO, you can use the Convert feature again. This time, select ALGO in the top field and the cryptocurrency or fiat currency you want to convert to at the bottom. Click [Preview Conversion] to check the exchange rate. 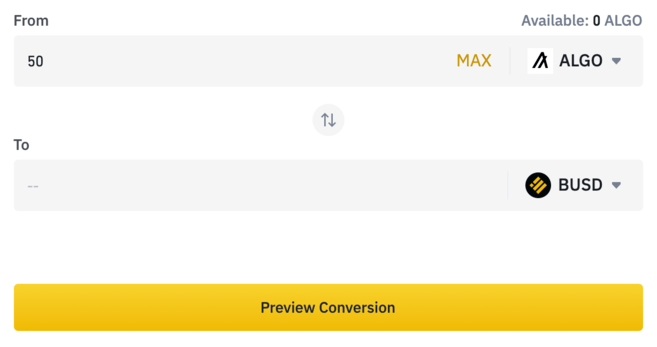 2. Once you've confirmed the amount you'll receive, follow the instructions given to finalize your trade. 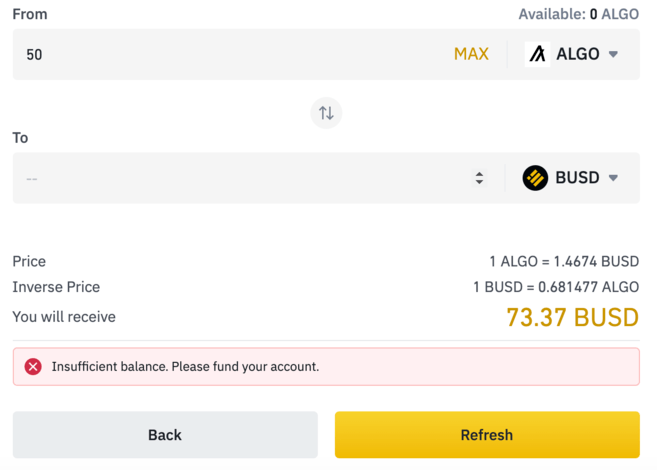 Like other alternative blockchains to Bitcoin and Ethereum, Algorand has focused heavily on scalability, speed and decentralization. Its Pure Proof of Stake consensus mechanism provides a unique solution with VRFs, and many find this blockchain technology attractive for its success in decentralizing power.