Why Is Loot Project Trending in the NFT Gaming Community?
Cuprins
Introduction
What is Loot?
How does it work?
How do we determine the value of a Loot NFT?
How is Loot different from typical NFT projects?
How does the NFT community build on top of Loot NFT?
Why is Loot so popular?
Closing thoughts
Blockchain 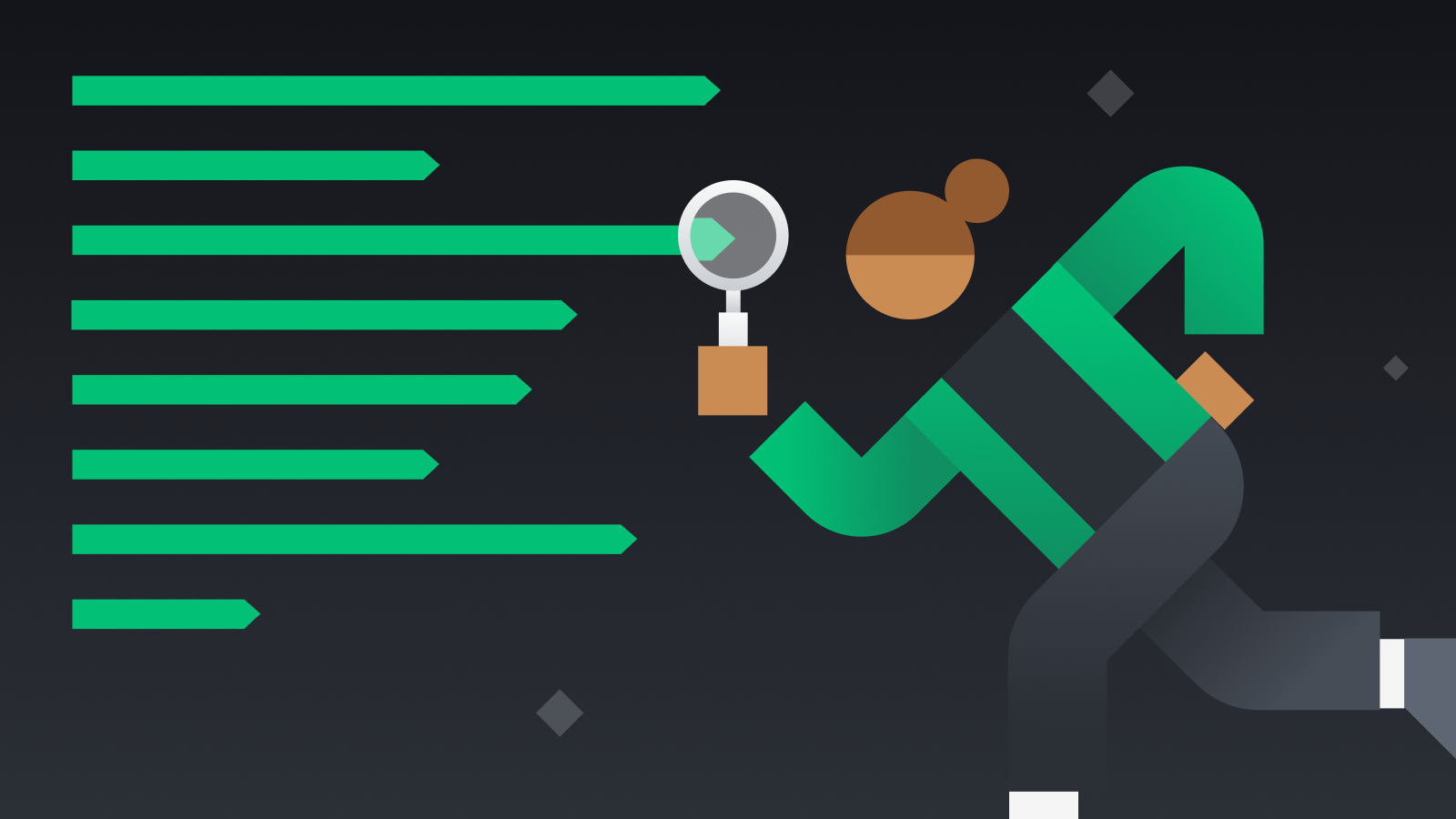 Acasă
Articole
Why Is Loot Project Trending in the NFT Gaming Community?

Why Is Loot Project Trending in the NFT Gaming Community?

Loot is a collection of 8,000 NFTs, each one consisting of a list of RPG-style items. The NFTs, known as Loot Bags, all have a unique mixture of items, and each item occurs a different amount of times. The Bags had no minting fee and could be bought just for the gas transaction fee.

The Bags can then be ranked based on their Rarity Score or Bag Score, both different measures of how often the items in each bag occur.

There is no game, rules, or official system associated with Loot Bags. The NFTs are generated as items to be used in games or projects made by the community. This has led to the generation of communities, developer tools, guilds, market trackers, and derivative projects using Loot Bags in their worlds.

Loot has received a lot of hype due to its innovative nature. While it doesn’t add any new features or utility, this is what has actually made it so popular. The freedom to use Loot as you wish makes it incredibly versatile.

In a short space of time, Loot has become another popular project in the NFT space. However, these virtual bags of items have brought innovative ways of using NFTs. A large community has appeared, creating new use cases for the tokens based completely on their own ideas.

Loot is an NFT (non-fungible token) project consisting of 8,000 unique "bags" of RPG-style adventuring equipment. The project was launched by Dom Hofmann, co-founder of the social media platform Vine. Each "Loot bag" contains eight pieces of adventurer gear covering everything an adventurer would need: chest, gloves, shoes, head, waist, necklace, ring, and weapon. These NFTs were distributed freely to users who were only required to pay the gas fees (transaction fee) of minting them. Bags 1 to 7,777 were open to the public, but bags 7,778 to 8,000 were reserved for the project's founders. 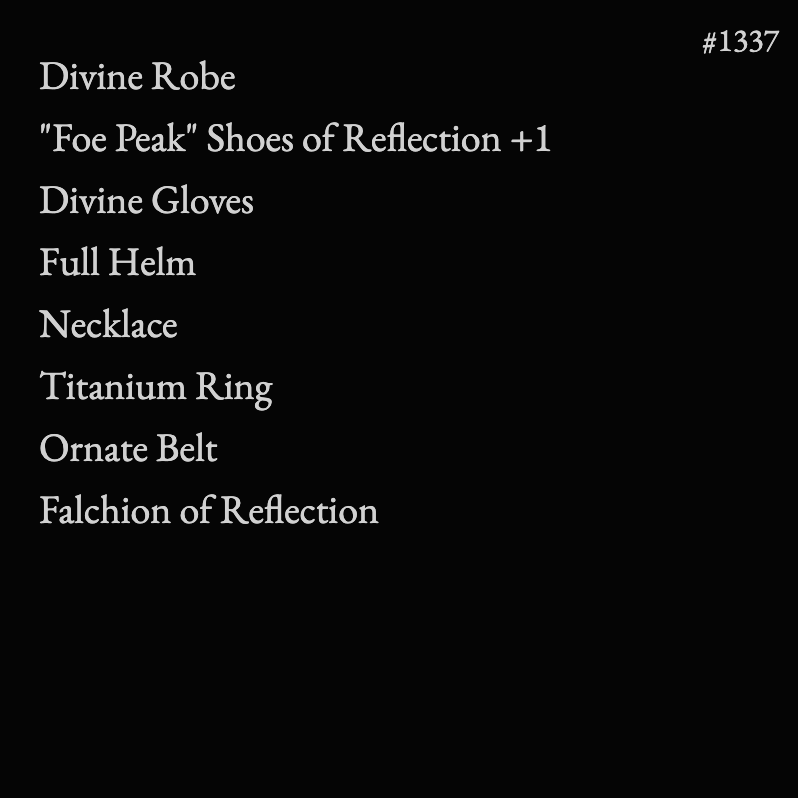 So far, this sounds like your standard NFT project. However, Loot is currently unique because there's no official use case for each Loot bag. Usually, NFTs are made with a game or application in mind. Loot instead lets the community decide what to do with the NFTs and how they can incorporate them into their platforms and creations.

Loot NFTs are ERC-721 Ethereum tokens that are non-fungible, meaning that each one is unique and cannot be duplicated. Loot's smart contract contains a level of randomization that generates each NFT's eight loot items and their "greatness" scores. The higher the score, the greater the variability in the item's name.

Let's look at an example. Below we have the list of eight items for bag #6161. It contains two common, three uncommon, one rare, one epic, and one mythic item. A mythic item is the rarest, appearing only once out of all items in the Loot ecosystem. 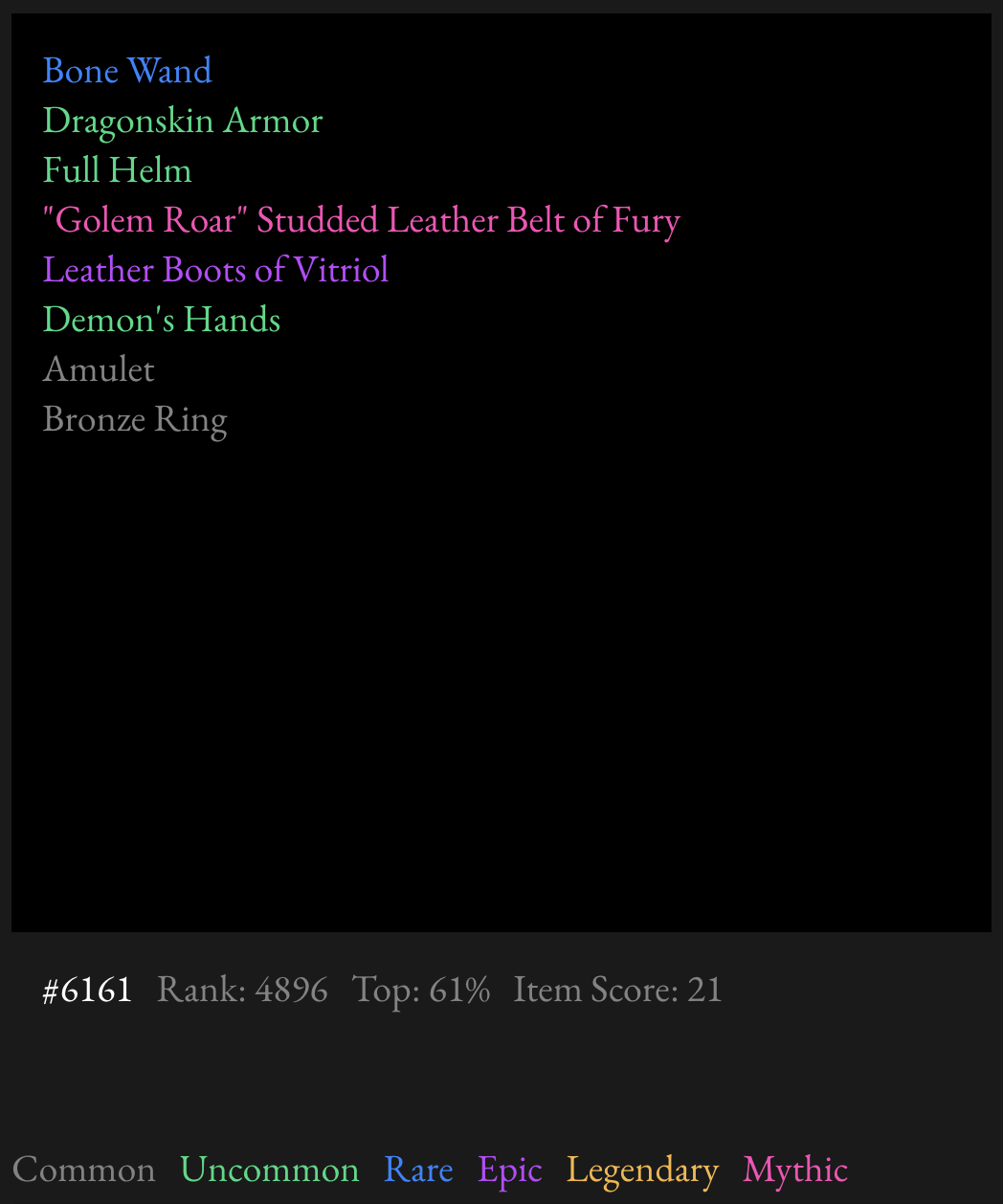 The rarity of the items contained in a bag is one of the most significant determinants of the bag's value. However, other factors can come into play when we think about value.

How do we determine the value of a Loot NFT?

While Loot hasn't officially defined what makes their NFTs valuable, the community has developed its own systems of determining value. The primary method at the moment relies on rarity. Each item appears only a certain amount of times and has a Rarity Score.

Your Item Score is calculated by summing up the Rarity Score of all items in your bag. You also have a Bag Rank based on the sum of the number of occurrences of each item in the Loot ecosystem. The monetary value that people place on Loot Bags is mainly depending on Item Scores and Bag Rank. Loot Bags are going for tens of thousands of dollars, based on the speculation of their future worth.

The long-term value of Loot Bags will rely on the applications and ecosystems that will develop around them. Certain games may value items that aren't necessarily the rarest. Because each bag can be valuable in different ecosystems, multiple use cases may influence prices.

How is Loot different from typical NFT projects?

A key distinction between Loot and other NFT projects is its bottom-up approach. But what exactly does this mean? NFT projects almost always take their direction from their founders and developers. Most new NFT blockchain games or projects will have their mechanisms and rules defined by the developing team, with little or no input from the community.

Loot, however, takes a bottom-up approach. While the founders created the NFTs, it's up to the community to decide their value and how to use them. Soon after the creation of Loot, communities and projects have already developed to use each Loot bag in unique ways.

As previously discussed, each item in a Loot bag is smart-contract readable within the NFT. So while a bag is a collection of goods, each item has a lot of weight in the bag's value. This aspect is also relatively rare for NFTs as they're usually treated more as a whole package.

How does the NFT community build on top of Loot NFT?

Developers and fans have already created a vast list of projects based on Loot NFTs. The potential is endless and relies only on how you can incorporate an NFT into your project. The main ways to contribute are split into five categories: communities, developer tools, guilds, market trackers, and derivative projects. Let's take a closer look at them.

Developer tooling includes scripts, wrappers, and art generators that can help builders create their projects. For example, Pixel Character Generator creates automatic images from each Loot NFT, which can be used in a game or other applications. 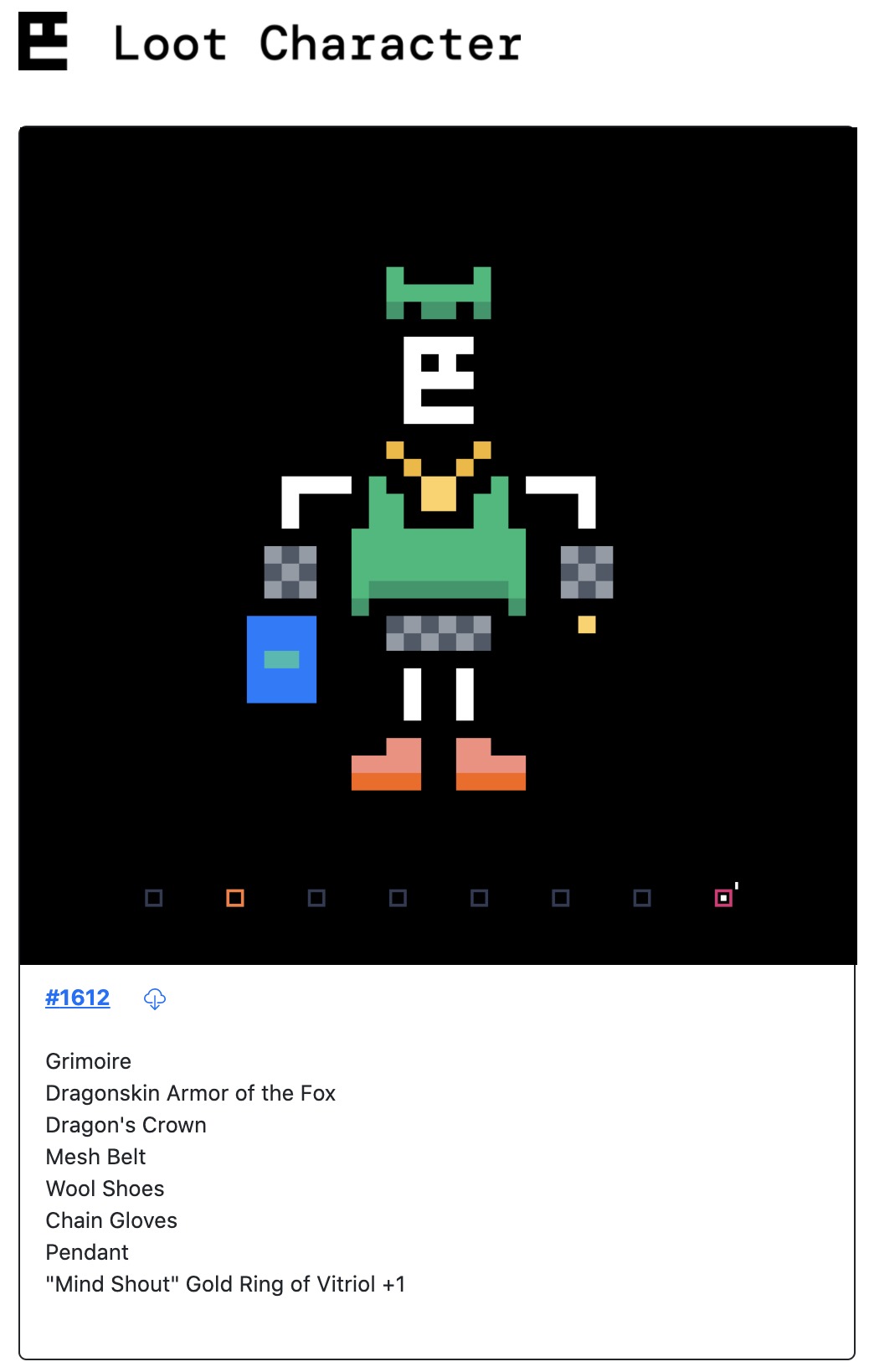 Loot Sound generates a unique sound for each Loot NFT, making them usable in other applications or games. Each item within the Loot bag has an individual sound that is combined with the other seven items' sound effects. 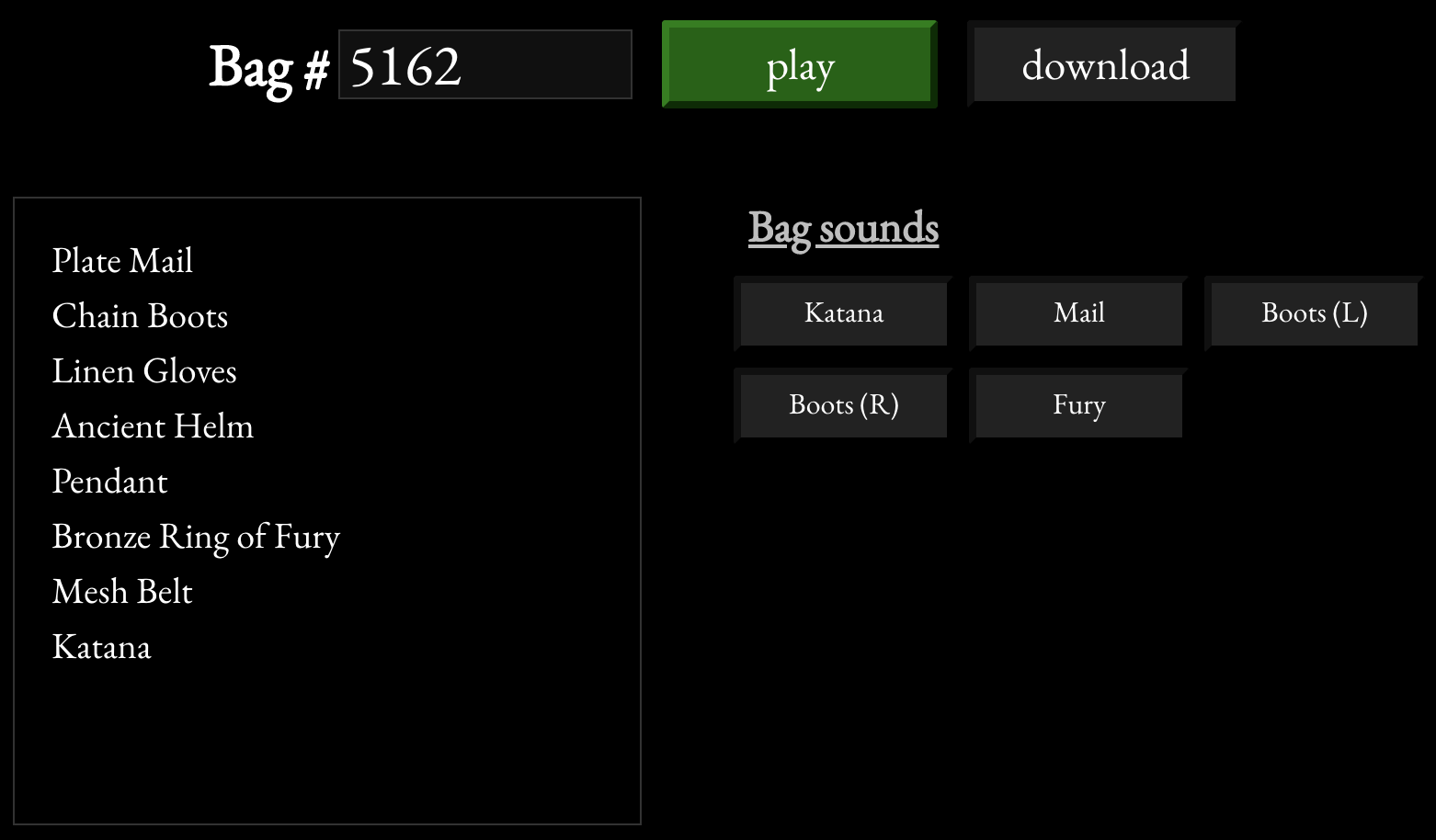 Katana Garden is a guild for Loot NFT owners who have the Katana weapon item in their Loot bag. Precisely what they do is only known to Katana holders. The guild members interact through Reddit, and membership is based on proving your ownership of a Loot Katana.

Market trackers are simple tools to find which NFTs contain a specific item, the address that they belong to, and current market prices. For example, if you head to robes.market, you can see which wallets hold a Divine Robe in their collection.

Loot Dungeon is a blockchain game incorporating Loot NFTs. By staking your Loot, you can battle a monster with the results determined using Chainlink VRFs. These are Verifiable Random Functions that can provide a randomized, on-chain "dice roll". In Loot Dungeon, the Chainlink VRF runs the battles, and unique items are given to the winners with AI-generated pixel art.

Upon entering a Loot dungeon, your Loot NFT is sent to a smart contract. You then have 24 hours to decide to fight the monster or escape. If you die, you will lose your Loot NFT unless you pay a maximum fee of 0.05 ETH.

Why is Loot so popular?

In a short time, Loot has captured the imagination of NFT fans, developers, and investors. The bottom-up approach supports decentralization, a key principle of cryptocurrencies. Giving users the power to decide what to do with each NFT takes away control from a centralized group of devs and encourages creativity. On the other hand, traditional NFTs have also innovated, but their use is locked into specific platforms. Staking benefits, gaming utility, governance systems, and more are practical and typical NFT use cases, but they have now become standard and less exciting to the NFT community. Loot can provide all of these benefits too, but being given the choice of how to apply a Loot NFT has led to their quick popularity.

Loot has provided a novel, new concept that has already been praised by the likes of Vitalik Buterin and the cryptocurrency community. Blockchain has always supported decentralization and putting power in the hands of users. After a long period of a top-down approach with NFTs, it will be interesting to see the projects and concepts that develop from Loot's concept.