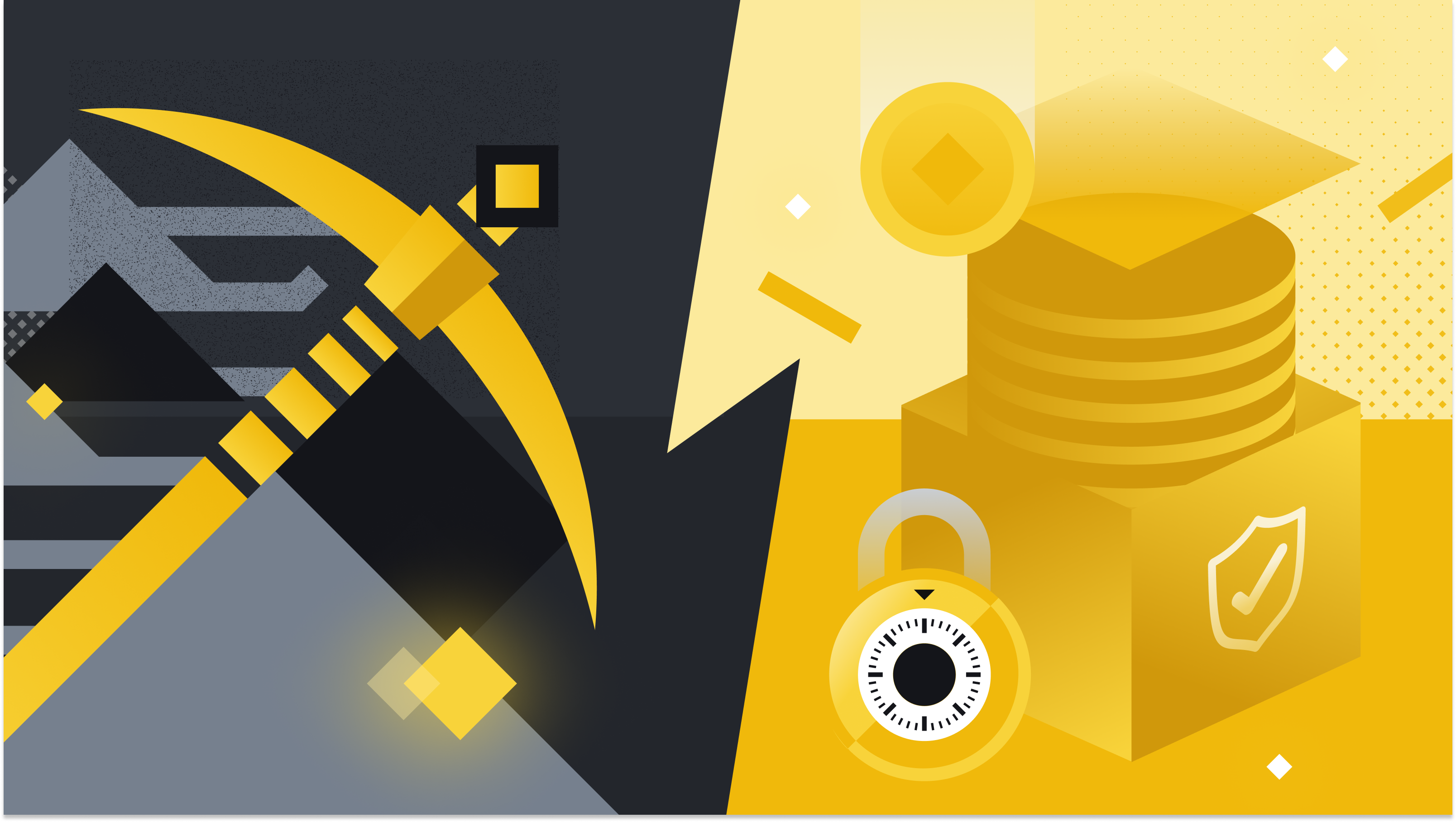 Proof of Work (PoW) vs. Proof of Stake (PoS)

Proof of Work (PoW) and Proof of Stake (PoS) are the most common consensus mechanisms. They are adopted by major cryptocurrencies to secure their network.

Proof of Work is used in Bitcoin to validate transactions and secure the network. Apart from other things, PoW prevents double-spending. The blockchain is secured by participants called miners, who use computational power to compete for the right to confirm new blocks and update the blockchain. A successful miner will be rewarded in BTC by the network. As of December 2021, a miner can get a block reward of 6.25 BTC plus transaction fees by successfully mining a Bitcoin block.

The major difference between PoW and PoS is the way they determine who gets to validate a block of transactions. Proof of Stake is the most popular alternative to Proof of Work. It’s a consensus mechanism that aims to improve on some of the limitations of PoW, such as scalability issues and energy consumption. In PoS, participants are called validators. They don’t need to use powerful hardware to compete for the chance to validate a block. Instead, they need to stake (lock) the native cryptocurrency of the blockchain. The network then selects a winner based on the amount of crypto staked, who will be rewarded a proportion of the transaction fees from the block they validate. The more coins staked, the higher the chance to be chosen as a validator.

To ensure that transactions recorded on a blockchain are valid, these networks adopt different consensus mechanisms. Proof of Work (PoW) is the oldest one. Created by Satoshi Nakamoto, it’s considered by many as one of the safest alternatives. Proof of Stake (PoS) was created later, but it’s now seen in most altcoin projects.

Apart from Bitcoin, PoW is also used in other major cryptocurrencies like Ethereum (ETH) and Litecoin (LTC). In contrast, PoS is used by Binance Coin (BNB), Solana (SOL), Cardano (ADA), and other altcoins. It’s worth noting that Ethereum plans to switch from PoW to PoS in 2022.

What is Proof of Work (PoW) and how does it work?

Proof of Work (PoW) is the consensus algorithm adopted by the Bitcoin network and many other cryptocurrencies to prevent double-spending. It was introduced by Satoshi Nakamoto in the Bitcoin whitepaper, published in 2008.

In essence, PoW determines how the Bitcoin blockchain achieves distributed consensus. It’s used to validate peer-to-peer transactions in a trustless manner, without the need for third-party intermediaries.

On a PoW network like the one of Bitcoin, transactions are verified by miners. They are participants that use a great amount of resources to ensure the network continues to run securely and correctly. Among other tasks, miners create and validate blocks of transactions. But in order to compete for the right to validate the next block, they need to use highly specialized mining hardware to solve complex mathematical puzzles.
The first miner that manages to find a valid solution for these math problems, earns the right to add their block to the blockchain and receive what we call a block reward. Block rewards are made up of newly generated cryptocurrencies plus transaction fees. The amount of crypto in a block reward varies according to the different networks. For example, on the Bitcoin blockchain, a successful miner can get 6.25 BTC plus fees from each block reward (as of December 2021). However, the number of new BTCs generated per block is reduced by 50% every 210,000 blocks (approximately every four years) due to a mechanism known as halving.
If you’d like to learn about the Proof of Work model in more detail, check out this What Is Proof of Work (PoW)?.

What is Proof of Stake (PoS) and how does it work?

Proof of Stake (PoS) is a consensus algorithm introduced in 2011 as an alternative to Proof of Work. It aims to overcome the scalability limitations of PoW networks. PoS is the second-most-popular algorithm adopted by cryptocurrencies like Binance Coin (BNB), Solana (SOL), and Cardano (ADA).

While PoW and PoS share the same goal of reaching consensus in the blockchain, PoS has a different way of determining who validates a block of transactions. There are no miners on PoS blockchains. Rather than relying on powerful computers to compete for block validation rights, PoS validators rely on their crypto holdings.

To be eligible to validate a block, participants need to lock a certain amount of coins in a specific smart contract on the blockchain. This process is known as staking. The PoS protocol will then assign a participant to validate the next block. Depending on the network, this selection can be done randomly or according to their holdings (stake). The selected validator can receive transaction fees from the block they validated as rewards. Typically, the more coins they lock up, the higher the chance to be selected.
Please refer to Proof of Stake (PoS) Explained for more details.

Differences between Proof of Work vs. Proof of Stake

Despite both being consensus mechanisms that ensure the security of the blockchain network, there are certain differences between the two. The major difference is, of course, how PoW and PoS determine which participant validates new transactions. For a clearer understanding, let’s take a look at the table below:

Is Proof of Stake better than Proof of Work?

Proof of Stake supporters argue that PoS has some benefits over PoW, especially regarding scalability and transaction speed. It’s also said that PoS coins are less harmful to the environment when compared to PoW. In contrast, many PoW supporters argue that PoS, as a newer technology, is yet to prove its potential in terms of network security. The fact that PoW networks require significant amounts of resources (mining hardware, electricity, etc.) makes them more expensive to attack. This is particularly true for Bitcoin, as the biggest PoW blockchain.

As mentioned, Ethereum (ETH) is expected to switch from PoW to PoS in the Ethereum 2.0 upgrade. ETH 2.0 is a long-anticipated upgrade to the Ethereum network to improve its performance and address its scalability issue. After the implementation of PoS on Ethereum, anyone with at least 32 ETH will be able to participate in staking to become a validator and receive rewards.

Is PoS better than PoW? What is making the second-largest cryptocurrency by market capitalization adopt a new consensus mechanism?

On the Proof of Work blockchains, mining involves using computing power to hash the block’s data until a valid solution is found. For major cryptocurrencies today, the solutions are getting more challenging to find and the process of guessing massive amounts of hashes can be expensive in terms of hardware and electricity.

Therefore, some miners prefer to accumulate their mining resources in mining pools for a greater chance to get the block rewards. Some big mining pools invest millions of dollars and control thousands of ASIC mining hardware to generate as much hashing power as possible.

As of December 2021, the top 4 mining pools together control around 50% of the total Bitcoin hashing power. The domination of mining pools makes it more challenging for individual crypto enthusiasts to mine a block on their own.

But just how decentralized is mining then? On one side, there is still no single entity that can control confirmations on the network. If this occurred, a 51% attack would be possible and the network would lose its value. Some might argue that while mining is still decentralized, it is no longer heavily decentralized. Certain areas, mining equipment producers, and energy producers still dominate mining and reduce overall decentralization for proof of work blockchains.

The Proof of Stake consensus mechanism takes a different approach and replaces mining power for staking. This mechanism lowers the barriers to entry for an individual to confirm transactions, reducing the emphasis on location, equipment, and other factors. Your stake is simply determined by the amount of tokens you have.

However, most PoS networks require you to run a validator node to begin confirming transactions. This can be expensive to run, but not as much as several mining rigs. Users then stake their tokens behind certain validators, giving us a similar model to mining pools. So while Proof of Stake is easier to participate in for an average user, it is still susceptible to the same centralization issue as mining pools.

In addition to centralization risk, the fact that the top four mining pools have the majority of hashing power of the Bitcoin network could potentially increase the risk of a 51% attack. A 51% attack refers to a potential attack on the security of a blockchain system by a malicious actor or organization that manages to control over 50% of the total network hashing power. The attacker could override the blockchain consensus algorithm and commit malicious acts to benefit themselves, such as double spending, rejecting or altering transaction records, or preventing others from mining. However, this is unlikely to happen on Bitcoin due to the size of its network.

In contrast, if someone were to attack a PoS blockchain, they would have to own more than 50% of the coins on the network. This would cause the demand in the market and the coin price to rise, which could cost tens of billions of dollars. Even if they do commit a 51% attack, the value of their staked coins would go down drastically as the network gets compromised. Therefore it is not very likely for a 51% attack to happen on a crypto that uses the PoS consensus, especially if it's a large market cap one.

Drawbacks of Proof of Stake

Many see Proof of Stake as a better alternative to Proof of Work, but it’s worth noting that there are also shortcomings in the PoS algorithm. Due to the reward distribution mechanism, validators with more assets staked can increase their chances to validate the next block. The more coins a validator accumulates, the more coins they can stake and earn, which some people criticize as “making the rich richer”. These “richer” validators can also influence the voting on the network, as PoS blockchains often grant validators governance rights.

Another concern is security risks for smaller market cap crypto that adopts PoS. As mentioned, it is not very likely that a 51% attack would happen on the more popular cryptocurrencies like ETH or BNB. However, smaller digital assets with a lower value are more vulnerable to attacks. The attackers could potentially acquire enough coins to gain an advantage against other validators. They could exploit the PoS system by being frequently chosen to become validators. The rewards they earned can then be used for further staking and increase their chance to be chosen in the next round.

Proof of Work and Proof of Stake both have their place in the crypto ecosystem, and it is hard to say with certainty which consensus protocol works better. PoW might be criticized for creating high carbon emissions during mining, but it has proven itself as a secure algorithm to protect blockchain networks. Nevertheless, as Ethereum shifts from PoW to PoS, the Proof of Stake system could be more favored by new projects in the future.