How PoolTogether Turns Saving Money Into a Game

The wonders of Decentralized Finance (DeFi) give creative developers an entirely new set of building blocks to experiment with. The aim of the DeFi movement is to create an entirely new, open-source, permissionless, and transparent financial service ecosystem. This is at such an early stage of maturity that entirely new types of applications burst into existence regularly. One of the early examples of this explosion is PoolTogether, a lottery built on Ethereum where no one can lose. How does it work, and how can you participate? Let’s find out.

In essence, PoolTogether is an Ethereum application that turns saving money into a game. It does this by combining the power of blockchain technology, smart contracts, and Decentralized Applications (Dapps). It is basically a savings game that gives you a potentially huge upside and minimal downside.

Players can join the game by buying saving tickets, each giving them a chance to win a prize. At the end of each week, a winner is chosen who gets the prize and their tickets back. What makes this game unique, however, is that players who don’t win also get their money back. Everyone involved keeps their money! To fund the prize, PoolTogether uses the interest earned on purchased tickets. Let’s see how it works in more detail! 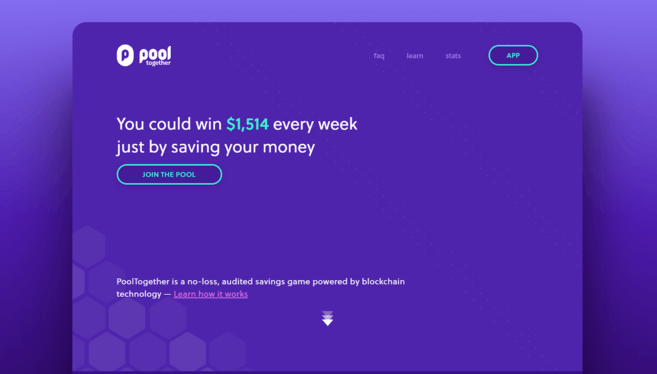 How does PoolTogether work?

Players deposit stablecoins into a smart contract (the pool) to buy tickets. Each ticket costs the equivalent of 1 USD. Each player can buy as many tickets as they want, and withdraw their money at any point. The funds in the pool are sent to DeFi lending platform Compound Finance, where they accrue interest for a period (currently, one week). At the end of the week, a winner is chosen at random, who gets the interest earned by the pool and their tickets back. Simultaneously, each other player gets their tickets back, and the game restarts.

PoolTogether is often referred to as a no-loss lottery, and now we understand why – none of the players can ever lose their funds. The only downside of joining the game is the opportunity cost of not being able to use the money elsewhere, and the small transaction fee you’ll have to pay.

In addition to tickets bought by players, there’s a part of the pool called the sponsored pool. This part of the pool earns interest but isn’t eligible for winning, making the chances to win even higher for regular ticket holders.

As of February 2020, the creators of PoolTogether don’t make money from this game. However, they plan to take a small percentage of the winnings in the future. It’s also worth mentioning that the smart contracts that select the winner each week are completely automated. As the code is open-source, you can view it yourself on GitHub.

How to use PoolTogether

Video tutorial is available here, or at the top of the article.

Entering the game is quite simple. You will need a wallet that supports the accepted stablecoins (Dai or USDC), for example, Trust Wallet. You’ll also need some ether to pay for gas.

Once your tickets are in the pool, you don’t have to enter every time there is a new prize. Your tickets will automatically be eligible to win until you withdraw. If you win, your winnings are automatically converted to tickets, increasing your chances of winning again.

It’s important to note that when you buy a ticket, it isn’t eligible for the current prize, only for the next one. This is to prevent players from exploiting the game by buying a ticket right before an interest accrual period (the week) is ending.

You can check the contract address yourself on Ethereum block explorer and analytics websites, such as Etherscan. You can also monitor the current size of the pool, the prize estimate, the number of tickets, and other handy statistics on the PoolTogether site.

The downsides of using PoolTogether

A counterargument against using this game could be that statistically, it’s making the rich richer. By design, a player who buys 1000 tickets will always have a higher chance of winning than one who buys only 10 tickets. In this case, the “richer” player essentially leverages its advantage by earning interest on not just their own, but the “poorer” player’s funds. As such, players who never win ultimately would have been better off if they sent their funds to a lending platform themselves.

According to PoolTogether, the contract powering the game has been audited by multiple independent auditing firms. Even so, it’s always worth considering that smart contracts are a new and experimental technology that is prone to have bugs and vulnerabilities.

Locking your funds in a smart contract is always a higher risk than, for example, keeping them in your own wallet. You are at your own responsibility when entering PoolTogether.

PoolTogether is a promising early example of what can be achieved with an open, permissionless financial system enabled by the power of blockchain technology. The idea of a lottery where even losing players get their entry price back is an entirely new concept that couldn’t exist otherwise.

Taking this idea further and bringing it to serve other types of use cases could also create compelling results. Locking up funds in an interest-earning pool could be useful for charity, crowdfunding, or other use cases that no one has thought of yet. The Decentralized Finance (DeFi) movement is just getting started, and PoolTogether is an early taste of the power that it can unleash.

How To Create TA Indicators on TradingView
12 minutes
What Is Uniswap and How Does It Work?
9 minutes
Binance DEX: Funding Your Testnet Account
1 minutes
Loading