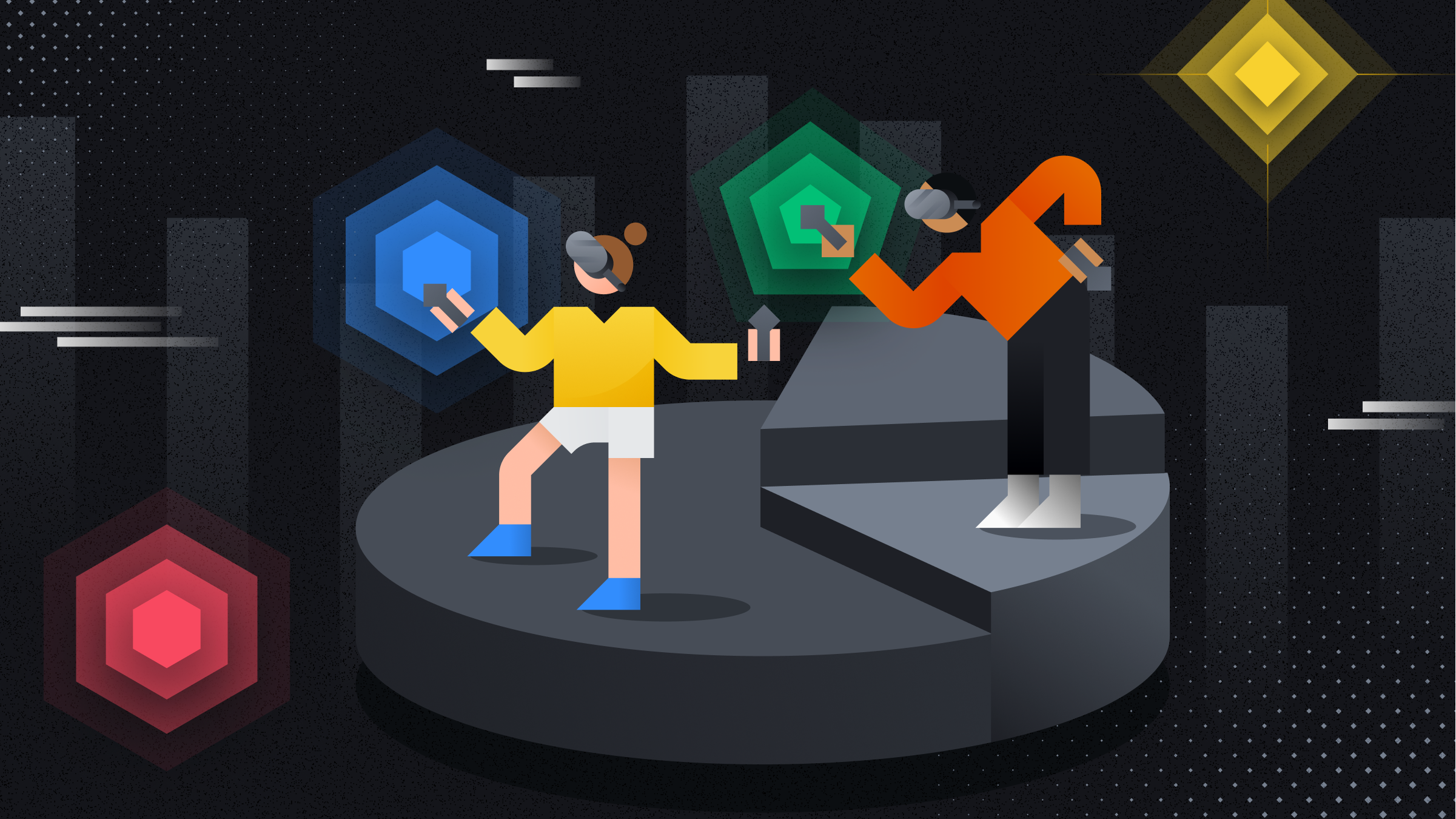 Startseite
Artikel
Which Companies Have Stocks in the Metaverse?

Which Companies Have Stocks in the Metaverse?

The Internet is on the verge of a new era, with both crypto projects and public companies exploring the possibilities of the metaverse. Some companies have confidently entered the metaverse early, while others have been on the fence despite their technology being an obvious fit. Such companies usually work with immersive hardware, 3D, interactive platforms, connectivity, blockchain, semiconductors, and security, which are essential for making the metaverse a reality.

The metaverse has the potential to be one of the technological trends to disrupt current market structures. The new technologies required to build the metaverse will also present opportunities for anyone to be part of this next step of the Internet, be they new projects, public companies, or even individual investors.

Why invest in the metaverse?

The metaverse has gained massive popularity in a short time. Facebook's rebranding to Meta may have established the metaverse as something more than a passing trend. Apart from crypto projects, numerous big companies have begun to recognize the metaverse as the next stage of Internet evolution.

The Internet has undergone a series of major changes throughout its history — namely, Web1, Web2, and Web3. The first version of the Internet consisted mainly of static sites that could display only information. Today, in the Web2 era, users have social media platforms and dynamic websites that allow them to alter their data and upload their own content.

We are currently anticipating the emergence of Web3, which could see the metaverse come to fruition. Web3 will consist of more open, connected, intelligent websites and web applications that will allow users to have greater ownership and control of their data and content. As such, Web3 could also weaken the power held by large, centralized Web2 enterprises today.

Like the metaverse, Web3 doesn't actually exist yet. However, some of its essential technologies do. For instance, blockchain and cryptocurrency could bring decentralization and digital economies to Web3.

In addition, virtual reality (VR) and augmented reality (AR) could enhance online social interactions on Web3 platforms. At the same time, artificial intelligence (AI) could improve language processing (such as for customer service bots) on Web3 due to its ability to link human-created content to machine-readable data.

With the metaverse, everyone has a chance to be part of the next phase of the Internet. For example, new projects could build metaverse components and solve the Internet’s current problems. Additionally, companies that are less financially restricted could build vital technologies and explore how their current products and services could contribute to the metaverse. Even individual investors can participate in Web3 by buying stock in metaverse-related companies.

How are major companies investing in the metaverse?

Publicly listed companies have been exploring the metaverse to see how it may suit their needs. For instance, Microsoft is focusing on virtual offices and working environments in the metaverse, while Google is developing an AR solution that connects the digital and real worlds. Similarly, Fortnite producer Epic Games plans to connect AR, VR, and 3D content to its platforms.

These developments give users a vision of what the companies behind them are trying to achieve. While there’s no way of knowing which companies will succeed in the metaverse, users can already buy their stocks — one way users can involve themselves in the metaverse ecosystem to aid its progress.

Businesses risk losing their competitive advantage if they don't keep up with fundamental changes in the economy, such as technological development. These changes usually give rise to new dominant companies and can cause one-time market leaders to lose their positions or even vanish from the market.

Growing interest in the metaverse may be the result of companies perceiving it as the next so-called secular trend. Secular trends are major changes in the industry that continue to develop over a long period of time, with prime examples including  personal computers, mobile devices, and e-commerce. Companies might therefore see involvement in the metaverse as necessary to support their future trajectory.

There are various ways in which public companies can enter or support the metaverse. This article will dive into immersive hardware, 3D creation software, interactive platforms, connectivity, blockchain, semiconductors, and security.

The different layers of metaverse investment

The popular consumer products of today are limited to sight and sound. Even our view of future metaverse hardware usually incorporates only VR headsets. However, immersive hardware could bring the dimension of touch to the metaverse. For instance, potential haptic devices could allow people to have a physical connection with the virtual world.

Creating digital environments that mimic the real world as closely as possible can be difficult and time-consuming. With 3D cameras, however, 3D creation software may be able to solve these problems.

Developers would first capture natural environments on film, then feed the 3D spatial data to the relevant software. This software would then process and generate a virtual double that could be used in the metaverse as a base on which users can build.

Online shopping is huge in the Web2 era — with interactive tools, users can add things to their shopping carts and move between pages via links by clicking the correct spots on their screens. Similarly, native interactive tools and venues are needed to enable users to interact with the metaverse. Interactive platforms would make this a reality and drive activity in the metaverse.

Fast connectivity has been indispensable since the advent of the Internet. The metaverse will likewise need lightning-fast connection to enable users to work, socialize, and play in real time. Computers must also be powerful enough to render 3D to ensure smooth connectivity.

Blockchain technology could become a foundational layer of the metaverse. It allows for a decentralized and transparent way to achieve digital proof of ownership, digital collectibility, and governance. It also promotes accessibility and interoperability.

In addition, cryptocurrency is built on the blockchain and enables users to transfer value while they work and socialize in the metaverse. Other blockchain applications for the metaverse include non-fungible tokens (NFTs) and decentralized finance (DeFi).

As mentioned above, the metaverse will have higher computing power requirements, thereby necessitating advancements in semiconductor technology. Furthermore, improved semiconductors are essential for the metaverse as it will generate a large amount of data to be stored.

The metaverse will collect a vast amount of data from its users, many of whom would prefer to remain anonymous and not leave any trace of their identities, finances, or other sensitive data in the wrong hands. This is why the metaverse will require cybersecurity solutions.

What companies have stock in the Metaverse?

Unity Software is the industry leader in 3D software, with half of all 3D content produced today using its software technology. It stands to reason, therefore, that Unity Software could be involved in creating metaverse content.

Shopify is one of the world’s largest e-commerce platforms. Its current software products are aimed at online retailers, assisting them with payments, analytics, and order completion. This gives it the potential to shape commerce relations in the metaverse. Shopify already has an NFT platform in beta that allows NFT sales using its storefront. It also has a token-gated commerce platform its clients can use to connect with fans and drive sales.

Since its rebranding from Facebook, Meta has invested billions of dollars in developing metaverse content, software, and AR and VR headsets.

Match Group is the parent company of popular dating apps like Tinder and Hinge. It acquired leading South Korean social discovery and video technology company Hyperconnect in 2021 to create new digital channels through which people could meet and engage with new connections, regardless of borders and language barriers.

CrowdStrike Holdings is a cybersecurity technology company that offers cloud-delivered protection to stop breaches and as such, could meet the metaverse’s cybersecurity needs.

The metaverse is a hot topic in the technology industry that has already attracted investments from many companies despite not actually existing yet. Web3’s potential to shift power from centralized Web2 giants to the people may well lead new projects, public companies, and even individual investors to invest in its critical infrastructure.