What Is BENQI (QI)?
Inhaltsverzeichnis
Introduction
What is BENQI?
How does BENQI work?
What makes BENQI unique?
Closing thoughts
Altcoin 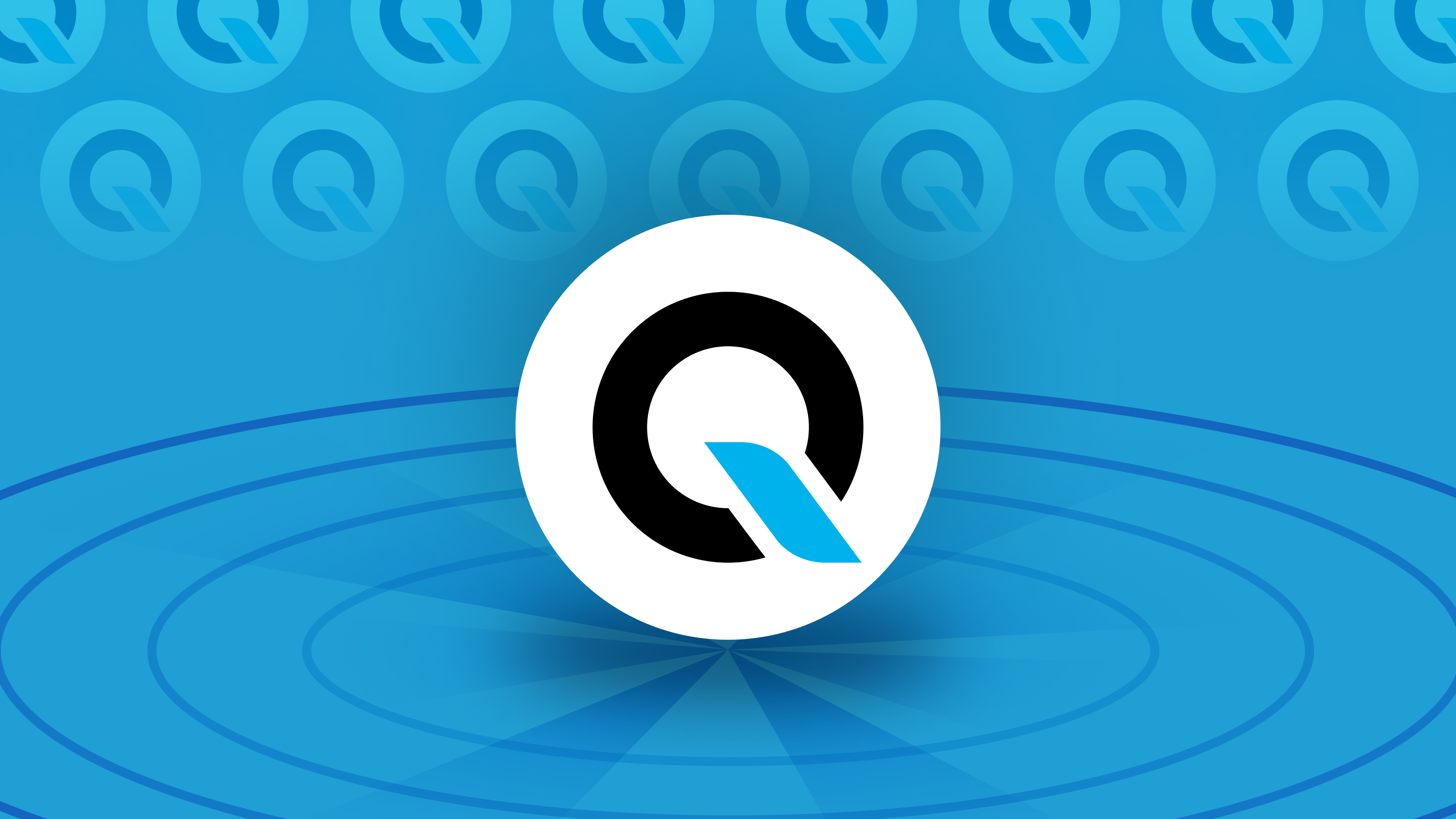 Startseite
Artikel
What Is BENQI (QI)?

BENQI Liquidity Market (BLM) enables users to lend, borrow, and earn interest on their crypto assets effortlessly. Depositors providing liquidity to the protocol earn yield, while borrowers can borrow in an over-collateralized manner.

Decentralized finance (DeFi) has grown significantly over the past few years. This important crypto sector provides users transparent, accessible, and permissionless platforms for accessing financial tools. Whether you’re using BNB Chain, Ethereum, Avalanche, or another network, a wealth of financial services is available with just a few clicks.

With a focus on approachability, ease of use, and low fees, BENQI aims to democratize access to two fundamental financial products: liquid staking, an innovative financial product for unlocking the value of staked coins, and lending & borrowing.

BENQI Liquidity Market (BLM) is BENQI’s lending and borrowing protocol. Users can lend and borrow crypto-assets listed in a permissionless manner via smart contracts with no human intermediaries involved. Users earn yield for depositing assets into the market, and borrowing is done in an overcollateralized manner.

How does BENQI work?

Through BLS, users stake AVAX on the EVM-compatible Avalanche C-Chain without needing to stake on the Avalanche P-Chain. This mechanism allows users to earn validating rewards from the P-Chain without running a full node, locking up AVAX on a validator node, or meeting the minimum staking threshold.

Users can redeem the AVAX asset at any time with no fees through a 2-week unstaking cooldown period or instantly swap it via AMMs with an exchange fee. 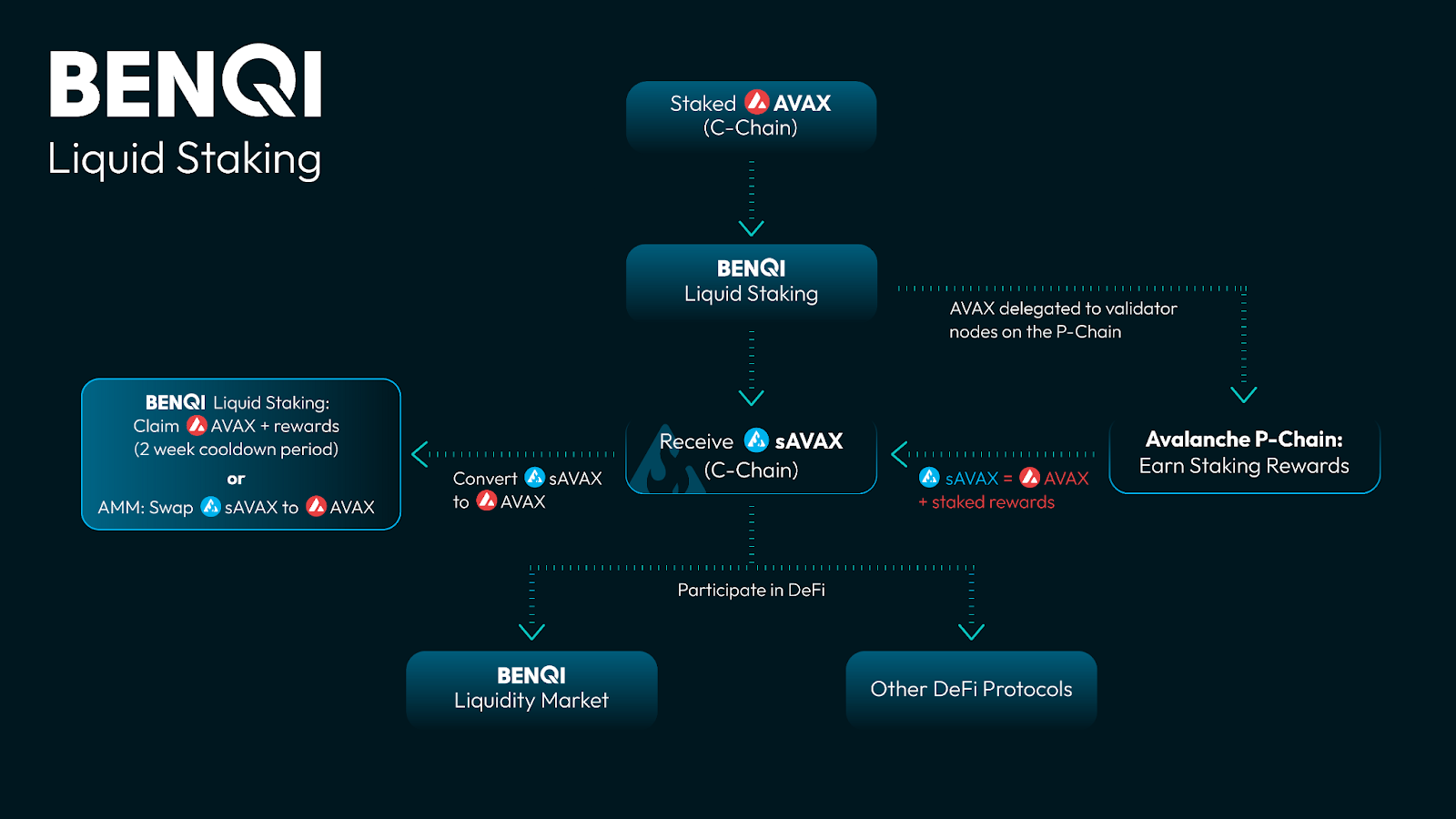 BLM is BENQI’s lending and borrowing protocol deployed on the Avalanche network. It enables users to effortlessly lend, borrow, and earn interest with their crypto assets. Unlike traditional lending and borrowing markets, BLM operates entirely via smart contracts with no human intermediaries.

Through smart contracts, yield is calculated algorithmically based on lenders' supply against borrowers' demand on BLM. Depositors providing liquidity to the protocol earn yield based on the algorithm, and borrowers can borrow in an over-collateralized manner.

Third parties that liquidate borrowers’ assets earn a reward fee. These liquidations are based on parameters set within these smart contracts and the price feed of assets supplied to them. BLM sources these price feeds from a decentralized oracle network, Chainlink, that provides reliable and secure price data.

BENQI prioritizes approachability, ease of use, and low fees. By deploying on the Avalanche network, users can enjoy the benefits of a highly scalable platform that is both decentralized and low in fees. The founding BENQI team works extensively with both the Avalanche and DeFi community to continuously review and improve the BENQI unique suite of protocols that includes:

1. A seamless staking experience - BLS offers users a seamless solution to stake AVAX. By staking with BLS, users bypass the tedious process of running an Avalanche validator or having to meet the minimum requirement for staking on the Avalanche P-Chain.

3. Utility - The veQI token provides the QI token utility. By staking QI for veQI, Avalanche validators can directly stake AVAX delegations from BLS to their validator of choice to earn additional delegation rewards.

Universal access - Assets listed on BLM include most blue-chip assets, like wBTC, wETH, AVAX, sAVAX, and a variety of widely adopted stablecoins, including BUSD. Through BLM, users can easily earn a yield on their assets while borrowing in an over-collateralized manner.

QI is the native token for BENQI with two main functions: governance and utility. QI is BENQI’s governance token that oversees the improvements and changes of the BENQI protocol. QI is required to decide and vote on proposals set out by the BENQI DAO, steering the direction of the protocol. Key parameters proposed and voted on include economic proposals, security upgrades, and additional development of the BENQI protocol.

BENQI opens up a wealth of options for existing users of DeFi or users curious to try DeFi without the additional friction it previously brought. With a focus on usability and a protocol with deep integrations within other DeFi platforms, all users need is a web3 wallet, an internet connection, and some funds.